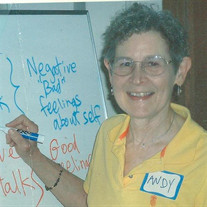 Andrea Joyce “Andy” Lowe, 76, of Lindsborg, Kansas, passed away Monday, January 8th, 2018, peacefully and surrounded by family, at Salina Regional Health Center in Salina, Kansas. Andy was born in Cleveland, Ohio on April 3, 1941, the daughter of Nathan and Zelda Lynn, both second generation Jewish immigrants. At the age of eight, Andy and her family moved to Memphis, Tennessee. As a high school student there, she met her lifetime companion, David Lowe. The two were married in 1964 and had two children, Becky and Zach. A Julliard-trained musician, Andy found her true calling in her 30s, when she went back to school in social work, obtaining a Master of Social Work degree from the University of Kansas. Putting her degree immediately to use, Andy became a marriage and family counselor with McPherson Family Life Center, where she saw clients and taught classes for the next 35 years. Even after the agency closed, Andy did not give up her life’s work, establishing her own private practice, McPherson Family Counseling, late in her career. Over the years, Andy helped thousand of individuals and families throughout Central Kansas live happier and healthier lives. Andy was a committed lifelong learner. In addition to keeping abreast of the latest thinking in her field, she read widely on any topic that struck her interest - from world history to Jewish culture to astronomy. Along with her intellectual pursuits, Andy enjoyed working with dogs. She became active in the Salina Kennel Club after she and her husband acquired their beloved miniature schnauzer, Maggie, in 2008. Andy was also an active member of the First Congregational United Church of Christ in McPherson, Kansas for more than 40 years, where she gave of her time and had many wonderful friends. Andy is survived by her husband, David Lowe, of Lindsborg, Kansas; daughter Becky Coleman and her husband Keith, of Minneapolis, Kansas; and son Zach and his husband Jack, of Chicago, Illinois. She is also survived by grandchildren Nick and Kendra Coleman. Funeral service will be held at Glidden-Ediger Chapel in McPherson, Kansas at 1:30 on Friday, January 12th, 2018. Ron and Angela Devore will officiate. Burial will be at the McPherson Cemetery, McPherson, Kansas. In lieu of flowers, memorial contributions may be made to the American Heart Association or the Salina Kennel Club. Contributions can be sent in care of Glidden-Ediger Funeral Home, 2222 West Euclid St., McPherson, Kansas, 67460.

The family of Andrea Joyce "Andy" Lowe created this Life Tributes page to make it easy to share your memories.

Send flowers to the Lowe family.