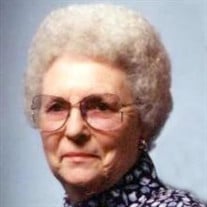 Anita Josephine Hopkins, 93, of McPherson, Kansas passed away at 3:36 p.m., Tuesday, September 15th, 2020 while in the company of family members, at McPherson Hospital . Anita was born in McPherson, Kansas on May 18, 1927, a daughter of Harold... View Obituary & Service Information

The family of Anita Josephine Hopkins created this Life Tributes page to make it easy to share your memories.

Send flowers to the Hopkins family.