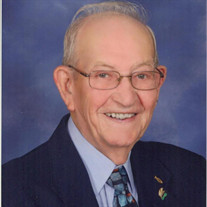 B. Paul Elmore, 90, of McPherson, Kansas, passed away at 7:18 p.m., Thursday, September 17th, 2020 peacefully, at Harmony Home. Paul was born in Galva, Kansas on October 24, 1929, a son of Elizabeth Grace (Aelmore) and Harvey Allen Elmore. Paul attended the Galva Grade school, and graduated from Galva High School, Galva, Kansas in 1948. Following his education Paul joined the United States Army where he was stationed in Germany during the Korean War and honorably served his Country and received the Army Occupation medal Germany. Paul was united in marriage to Carolyn Janette Cole on March 10, 1957 at the First Christian Church, McPherson, Kansas. Carolyn died on February 20, 2015. He was a member of First Christian Church McPherson, Kansas. Through the years Paul worked in the Galva area oil fields as a roust about, worked for his uncles on their farms and around in the neighborhood, was a Truck Driver and hauled Hay for Otis Bryant Trucking Firm and sand for Jack Bryant Trucking in Nebraska. He later started working for the National Cooperative Refinery Association now known as CHS, in November of 1952 in the Feed Unit, and through the years also worked in the Laboratory, in Maintenance, shift work in the Boiler House, and retired in 1992 as a Water Oil Treater. Paul was a life member of Veterans of Foreign Wars Post 2715 and a member of the American Legion Post 24; a member of the McPherson Barbershop, helped volunteered with Hunters Safety for many years. Paul enjoyed hunting, fishing, was an Indian Artifact Hunter with quite the Arrow Head Collection a lot from McPherson County and some from all over the U.S. He is survived by his loving and devoted daughter, Melinda Williams and husband Kelly, of McPherson, Kansas; his favorite grandson, Aaron Williams, of McPherson, Kansas. Paul was preceded in death by his parents, his wife Carolyn J. Elmore, his brother, William Harris "Willie" Elmore, his sisters, Dorothy Mary Kimble, Virginia Lee Allen, and Pauline Elizabeth Schnorr; and his favorite granddaughter, Courtney Nicole Williams. Visitation will be held on Tuesday, September 22, 2020 from 6 p.m. to 8 p.m. at the First Christian Church, McPherson. Funeral service will be held at First Christian Church, McPherson, Kansas, at 10:30 a.m. on Wednesday, September 23rd, 2020 with Pastor Lynn Scott officiating. Burial will be at the McPherson Cemetery McPherson, Kansas with Military honors presented by members of the Veterans of Foreign Wars Post 2715 and American Legion Post 24. In lieu of flowers, memorial contributions may be made to First Christian Church or Harmony Home in memory of Paul and they can be sent in care of the Glidden - Ediger Funeral Home; 222 West Euclid Street; McPherson, Kansas 67460.

The family of B. Paul Elmore created this Life Tributes page to make it easy to share your memories.

Send flowers to the Elmore family.