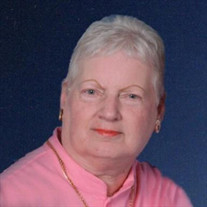 Florence Barbara Knittig, 79, of McPherson, Kansas, passed away at 11:40 p.m., Wednesday, April 27th, 2022 at McPherson Hospital. Barbara was born in St. Louis, Missouri on October 29, 1942, a daughter of Harriett G. (Vertrees) and Lawrence Charles Kraft. Barbara attended the St. Louis elementary schools and graduated from St. Cecilia High School, St. Louis, Missouri. Later in life when she was in Kansas she attended nursing school where she received her LPN Certificate. She was a member of St. Joseph's Catholic Church McPherson. Barbara was a homemaker and she took great pride in providing for her family in this manner. While she was in Kansas she worked for the Bethesda Home as a nurses aide and later became a LPN. She then worked for the Cedars Health Care Center for several years before becoming a hospice nurse from which she retired. Barbara was a former 4-H Club Leader in St. Louis, fostered dogs for the McPherson County Humane Society, and was a member of the McPherson Saddle Club. Barbara enjoyed taking classes at the Hutchinson Kennel Club with her dogs, crocheting, knitting, sewing, was an avid reader and loved to share time with her family and friends. Barbara Kraft was united in marriage to Leroy William Knittig on July 11, 1964 at St. Cecilia Catholic Church, St. Louis, Missouri. The young couple established their first home together in St. Louis. They were blessed with the birth of four children, three daughters, and a son, Valerie, Janice, Gail and Nicholas. In 1977 the family moved to Canton, Kansas because of a horse!. She is survived by her children, Valerie Cuthbertson and her husband Dale, of Canton, Kansas, Janice Holderness and her husband Jim, of Canton, Kansas, Gail Knittig, of Newton, Kansas and Nicholas Knittig, of Seagoville, Texas. She is also survived by 3 grandchildren 4 great-grandchildren Barbara was preceded in death by her parents; her husband Leroy, a half brother, Everett Carrick; Visitation will be held on Monday, May 2, 2022 from 5:00 p.m. to 6:30 at St. Joseph's Catholic Church in McPherson, Kansas with Rosary at 6:45 p.m.. A Mass of Christian Burial will be celebrated at on Tuesday, May 3, 2022 at 10:00 a.m. at St. Joseph's Catholic Church in McPherson, Kansas with Fr. Ben Shockey officiating. Burial will be at the McPherson Cemetery McPherson, Kansas. Memorial contributions may be made to St. Joseph's Catholic Church or the McPherson County Humane Society and they can be sent in care of the Glidden - Ediger Funeral Home; 222 W Euclid; McPherson, Kansas 67460.

The family of Barbara Knittig created this Life Tributes page to make it easy to share your memories.

Send flowers to the Knittig family.