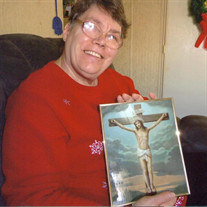 Barbara M Tessen, 74, of McPherson, KS, passed away at 6:00 p.m., Tuesday, August 8th, 2017while in the company of family members, at McPherson Health And Rehab. Barbara was born in Detroit, Michigan on March 20, 1943 a daughter of the Florence Eleanor (Gibson) and Carl Fredrick Schneider. Barbara attended St. Monica Catholic School in Detroit, Michigan, St. Patrick's Catholic School, in Brighton, Michigan, and graduated from St. Thomas Catholic High School, Ann Arbor, Michigan. She was brought up in the Catholic Faith and later attended Four Square Gospel Church in McPherson with her daughter. Barbara was a homemaker and she took great pride in providing for her family in this manner. She also worked in Michigan as a nurses aide for a nursing home, at a Boston Market resturant and Subway Store. Barbara enjoyed people, was very loving and caring person, and her family was the most important part of life for her. She also enjoyed playing games especially board games. Barbara Marie Schneider was united in marriage to Michael J. Tessen in 1964 at Fenton, Michigan. Michael died in 1971. Barbara is survived by her children, Carl Tessen, of Ann Arbor, Michigan, Trudie Burns and her husband Douglas, of McPherson, Kansas, and Gillis McCarter, of Ann Arbor, Michigan; her sisters, Ruth Schneider, of Brighton, Michigan and Becky Bianchi, of Trenton, Michigan; her grandson, Joshua Tessen; her great-grandchildren, Cobi Alexander Tessen and Connar Nathaniel Tessen; several nieces and nephews; other relatives and a host of friends. Barbara was preceded in death by her parents; There are no services planned at this time. In lieu of flowers, memorial contributions may be made to the Barbara M. Tessen memorial fund and they can be sent in care of the Glidden - Ediger Funeral Home; 222 West Euclid Street; McPherson, Kansas 67460.

Barbara M Tessen, 74, of McPherson, KS, passed away at 6:00 p.m., Tuesday, August 8th, 2017while in the company of family members, at McPherson Health And Rehab. Barbara was born in Detroit, Michigan on March 20, 1943 a daughter of the Florence... View Obituary & Service Information

The family of Barbara M. Tessen created this Life Tributes page to make it easy to share your memories.

Send flowers to the Tessen family.