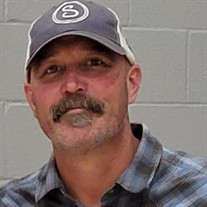 Barry Lynn Henry, 46, of Canton, Kansas, passed away suddenly at 3:25 a.m., Thursday, August 19th, 2021, at his home in rural Canton, Kansas. Barry was born in Dodge City, Kansas on December 16, 1974. Barry is the son of Leta Irene (Rule) and Gary Jerome Henry. Barry attended Dodge City grade schools and graduated from Dodge City High School, Dodge City, Kansas. He then attended and graduated from Tulsa Welding School, Tulsa, Oklahoma. Through the years Barry worked as a welder, pipefitter, and boilermaker for American Boiler and Mechanical, Salina, Kansas and was currently employed at CHS of McPherson as a pipefitter. Barry Lynn Henry was united in marriage to Sarah Elizabeth Aitken on June 2, 2007 in McPherson, Kansas. This union brought together Barry's son, Quentin and Sarah's daughters, Silas and Asa. The family established their first home together in McPherson. The couple was blessed with the birth of three children, Wyatt, Levi, and Jovey. In May of 2014 the family fulfilled their dream of moving out to the country. Barry enjoyed cooking and working in his shop. He loved being outside, was very good working with his hands, and renovating their homes. Barry enjoyed welding projects working with wrought iron. He also enjoyed construction projects and carpentry. His greatest love was spending time with his family and helping his children with their rodeo events and other activities. In his younger years, Barry loved dirt bike riding and camping. He is survived by his loving and devoted wife of 14 years, Sarah Henry, of Canton, Kansas; his children, Quentin Henry, of Dodge City, Kansas, Silas Courtney, of Canton, Kansas, Asa Courtney, of Canton, Kansas, Wyatt Henry, of Canton, Kansas, Levi Henry, of Canton, Kansas, and Jovey Henry, of Canton, Kansas; his parents, Leta and Gary Henry of Dodge City, Kansas; his brothers, Tracy Henry and wife Tami, of Garden City, Kansas and Bradly Henry and wife Staci, of Salina, Kansas; several nieces and nephews, other relatives and a host of friends. Barry was preceded in death by his maternal grandparents, Wayne and Doris Rule and paternal grandparents, Fred and Doris Henry. Visitation will be held on Tuesday, August 24th, 2021 from 6 p.m. to 8 p.m. at Glidden - Ediger Chapel, McPherson. Funeral service will be held at Immanuel Lutheran Church, Canton, Kansas, at 10:30 a.m. on Wednesday, August 25th, 2021 with Pastor Brent Horne officiating. In lieu of flowers, memorial contributions may be made to Barry Henry family fund and they can be sent in care of Glidden - Ediger Funeral Home; 222 West Euclid Street; McPherson, Kansas 67460.

The family of Barry Lynn Henry created this Life Tributes page to make it easy to share your memories.

Send flowers to the Henry family.