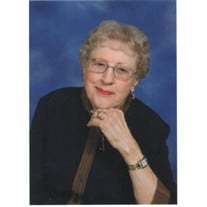 Bernadette Gertrude Hand, 92, of McPherson, Kansas, passed away at 8:32 p.m., Monday, October 5th, 2015 peacefully, at Angel Arms. Bernie was born in Walker, Kansas on April 23, 1923, a daughter of Barbara Elizabeth (Wagner) and Henry Matthew Robben.Bernie attended and graduated from St. Ann's Parochial and High School at Walker, Kansas. She then attended and graduated from Adela Hale School of Business of Hutchinson, Kansas.Bernie was a member of St. Joseph's Catholic Church McPherson, Kansas, where she was a member of the Altar Society. Bernie started working for C.R. Anthony's Department Store for 5 years, then worked for Montgomery Ward as a credit manager. She then worked for State Investment Company as a secretary for 5 years prior to starting with N.C.R.A. on January 27, 1957. She was the secretary to the Manager of Materials for 31 years until her retirement in 1988. Bernie was a life member of the VFW Post 2715 Ladies Auxiliary and Memorial Hospital Auxiliary both of McPherson, Kansas. Bernie enjoyed traveling which included overseas, spending with family, shopping, and she enjoyed going to casino's gambling and watching people. Bernadette G. 'Bernie' Robben Anderson was united in marriage to James Joseph Hand on April 10, 1999 at St. Joseph's Catholic Church, McPherson, Kansas. James died on August 30, 2002. Bernie is survived by her step children, James Russell Hand and his wife Shari, of Wichita, Kansas, John Michael Hand, of Wichita, Kansas, Mathew Henry Hand and his wife Stacy, of Amarillo, Texas, and Mary Helen Flinn, of Louisburg, Kansas; her sister-in-laws, Viola Robben, of Walker, Kansas and Lillian Robben, of Midwest City, Oklahoma; 4 step-grandchildren, Cindy, Jeffrey, Katie and Ryan Hand; many nieces and nephews, other relatives and a host of friends.Bernie was preceded in death by her parents, her husbands, Andy Anderson and James Hand, 6 brothers, Wilfred, Robert, Gilbert, Elmer, Eugene, and Paul Robben and 2 sisters, Eleanor Stanton and Mary Ann Robben. (Birth order Eleanor, Wilfred, Robert, Elmer, Eugene, Bernie, Paul, Gilbert, and Mary Ann.Friends are invited to call on Monday, October 12, 2015 from 9:00 to 9:30 a.m. with rosary at 9:30 a.m. at St. Joseph's Catholic Church. A Mass of Christian Burial will be celebrated at St. Joseph's Catholic Church, McPherson, Kansas, at 10:30 a.m. on Monday, October 12th, 2015 with Fr. Hien Nguyen officiating. The final resting place will be at the McPherson Cemetery McPherson, Kansas at a later date. In lieu of flowers, memorial contributions may be made to St. Joseph's Catholic Church in memory of Bernie and they can be sent in care of the Glidden - Ediger Funeral Home; 222 West Euclid Street; McPherson, Kansas 67460.

The family of Bernadette Gertrude Hand created this Life Tributes page to make it easy to share your memories.

Send flowers to the Hand family.