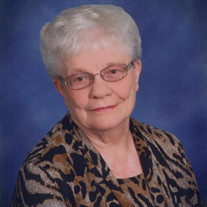 Billie Mack Sandidge, 89, of Mcpherson, Kansas, passed away at 2:20 am, Thursday, April 14th, 2022 at Wesley Medical Center, Wichita, Kansas with her daughter at her side. Billie was born in Prescott, Arkansas on August 30, 1932, a daughter of Ruby Mae (Goad) and Haze Beavert. Billie attended the Prescott grade schools and graduated from Prescott High School, Prescott, Arkansas in 1950. Billie Mack Beavert was united in marriage to Billy Jack Sandidge on December 23, 1950 at Gurdon, Arkansas. On October 5, 1951 the young couple moved to McPherson where they would make their home. This union was blessed with the birth of two children, one son and one daughter, Randy and Tracy. She was a member of First Baptist Church McPherson, where she served as Sunday School teacher, worked with the youth program, White Cross, and the funeral committee and was a faithful member of the Y.E.S. Sunday School class. Billie was a homemaker and she took great pride in providing for her family in this manner. She started working at Dillion's Grocery Store as a clerk and later for Western Auto also as a clerk. Billie worked for 21 years for U.S.D. 418 School Lunch Program serving lunch at the McPherson Junior High and later at the High School. Billie loved her grandchildren, Christmas, flower gardening and working in her yard. She also enjoyed watching the Royals Baseball Team, playing Bingo, Dominos, and playing cards with her friends. She is survived by her daughter, Tracy Viola and her husband Jeff, of McPherson, Kansas; her brother, Jimmie Beavert, of Hot Springs, Arkansas; her two grandchildren, Ryan Viola and wife Shannon and Morgan Williams and husband Mike; three great-grandchildren, Gavin Williams, Tyler Williams, and Mason Viola; nieces and nephews, other relatives and a host of friends. Billie was preceded in death by her parents; her husband Jack Sandidge; her son, Randy Sandidge; brothers, George Edward Beavert and Kenneth Beavert. Visitation will be held from 5 PM to 7 PM on Monday, April 18th 2022 at Glidden - Ediger Chapel in McPherson, Kansas. Funeral service will be held at 11:00 AM on Tuesday, April 19th 2022 at First Baptist Church in McPherson, Kansas with Reverend John Pattison officiating. Final resting place, McPherson Cemetery, McPherson, Kansas. In lieu of flowers, memorial contributions may be made to First Baptist Church and they can be sent in care of the Glidden - Ediger Funeral Home; 222 West Euclid; McPherson, Kansas 67460.

Billie Mack Sandidge, 89, of Mcpherson, Kansas, passed away at 2:20 am, Thursday, April 14th, 2022 at Wesley Medical Center, Wichita, Kansas with her daughter at her side. Billie was born in Prescott, Arkansas on August 30, 1932, a daughter... View Obituary & Service Information

The family of Billie Mack Sandidge created this Life Tributes page to make it easy to share your memories.

Billie Mack Sandidge, 89, of Mcpherson, Kansas, passed away at...

Send flowers to the Sandidge family.