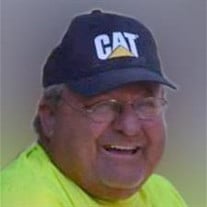 Brad Ek, 63, of Galva, Kansas, passed away at 9:00 a.m., Monday, April 13th, at Via Christi ,St. Francis Harry Hynes, Wichita, Kansas. Brad was born in McPherson, Kansas on November 12, 1953, son of Laurel Jean (Myers) Ek and Galen L. Ek. Brad attended the Galva grade school, and graduated from Galva High School, Galva, Kansas in 1971. He then attended Butler County Community College, El Dorado, Kansas and Kansas State University, Manhattan, Kansas. Through the years Brad worked for Kit Manufacturing and later McPherson County Public Works as a heavy equipment operator on the asphalt crew. Because of health issues Brad retired in November of 2016. Brad enjoyed reading, working puzzles, wood working, fishing, working at the County, eating, cooking on the Traeger, and spending time with his family and friends. Brad G. Ek was united in marriage to Susan M. Vance on September 17, 1977 at McPherson, Kansas. The young couple established their first home together in McPherson, Kansas. In 1978, they moved to Galva, Kansas. This union was blessed with the birth of two children, a daughter and a son, Missy, and Seth. He is survived by his loving and caring wife of 39 years, Susan Ek, of Galva, Kansas; his children, Missy Reves and her husband Bruce, of Westmoreland, Kansas and Seth Ek and his wife Laurie, of McPherson, Kansas; his siblings, Gail Wedel, of Galva, Kansas and Steve Ek and his wife Tammy, of Many, Louisiana; his grandsons, Cooper Reves, Tyler Ek, and Brandon Ek; several nieces and nephews, other relatives and a host of friends. Brad was preceded in death by his parents, Laurel Jean Ek-Koehn and Galen Ek. Friends are invited to visit with the family on Tuesday, April 18, 2017 from 6 to 8 p.m. at Glidden - Ediger Chapel, McPherson. No services are planned cremation has taken place as the family is following Brad's wishes. In lieu of flowers, please bring a children's book or you can make memorial contributions to the Brad Ek Memorial fund in which they will be used for the libraries at his grandchildren's schools as Brad was an avid reader.

The family of Brad Ek created this Life Tributes page to make it easy to share your memories.

Send flowers to the Ek family.