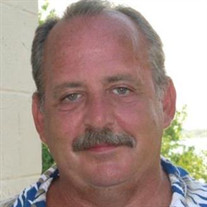 Bradley Wayne "Brad" Lewis, 56, of Kanopolis Lake, passed away at 7:57 a.m., Wednesday, April 26th, 2017 unexpectedly, at his home, Marquette, Kansas. Bradley Wayne Lewis was born on November 23, 1960, in Stillwell, Oklahoma, to Bill and Katie Lewis. He was preceded in death by his mother, Katie. He is survived by his wife, Shannon, son, Daine, father, Bill, brother Bob and sister Dianne, 3 step children: Sarah, Jake, and Anna, 10 grandchildren: Bella, Luke, Logan, Hailey, TJ, Max, Ella, Briggs, Piper, and Kayden. Mandy Dake, who Brad considered a daughter, nieces Rebecca, Melissa, Marci, Amy and nephew TJ. Brad graduated from McPherson High School in 1979. He loved sports and was very active in them in high school, playing basketball, baseball, football and track. He was an avid enthusiast watching college and pro sports on TV. Brad took great pride in the management of Wendy’s in Salina and the mentoring of so many young people. He was part of a close community at the lake partaking in many get togethers for anything that was cause for celebration or competition. He was so excited about the golf cart he won at a recent raffle. Brad and Brownie spent many evenings together devising plans to build and redesign a wide variety of projects and then putting that into action. Brad delighted in treasure hunting at auctions and sales. He loved his family and most recently was playing a huge role in caretaking for his Dad, who is on hospice care. We were blessed to have spent many hours together as a family for the past year doing just that. Brad’s last days were spent calling and visiting with family members, making sure his Dad was in touch with them. Brad was such a caring, sensitive person and was loved by all who knew him. He will be dearly missed. The memorial service will be held at 1:00 p.m., on Monday, May 22, 2017, at the First United Methodist Church, McPherson, Kansas with Pastor Darren Frazier officiating. The final resting place will be at the McPherson Cemetery, McPherson, Kansas. In lieu of flowers, no memorials were established, but cards can be sent to Glidden - Ediger Funeral Home; 222 West Euclid Street; McPherson, Kansas 67460 in memory of Brad and they will forward them to his family.

The family of Brad W. Lewis created this Life Tributes page to make it easy to share your memories.

Send flowers to the Lewis family.