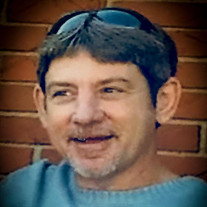 Bradley Richard Belisle, 53, of McPherson, Kansas, passed away at 7:53 a.m., Thursday, October 18th, 2018 suddenly at his residence. Bradley was born in New Orleans, LA on August 26, 1965, a son of Curtiss Richard Belisle and Deanne Daleen (Polson) Belisle. Brad attended the Cherokee Alabama Schools. Through the years Brad attended the Lutheran Church. Through the years Brad was a roofer for a construction company in Louisiana and painted for McPherson Paint Company prior to his disability. Brad enjoyed his friends and spending time with his family, music, was a handyman, helping others especially his parents, had a great sense of humor and was very good at singing his jingles that he made up off the top of his head. He is survived by his daughter, Britney Goode and her husband Matt, of Russellville, Alabama; his father Curtiss Belisle, of McPherson, Kansas and his brother Todd Belisle and his wife Linda, of McPherson, Kansas. He is also survived by 3-Grandchildren Brad was preceded in death by his grandparents, his mother Deanne Belisle and his sister Christy Krehbiel. Celebration of Life will be Friday, November 2nd, 2018 at 5:00 p.m. at the Canton Community Center, Canton, Kansas Final resting place will be at the McPherson Cemetery McPherson, Kansas. In lieu of flowers, memorial contributions may be made to McPherson Toys for Kids and they can be sent to Glidden-Ediger Funeral Home; 222 W. Euclid St., McPherson, Ks. 67460.

The family of Bradley Richard Belisle created this Life Tributes page to make it easy to share your memories.

Send flowers to the Belisle family.