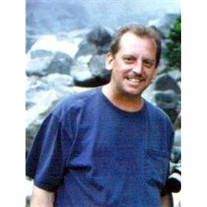 Mr. Brent R. Ediger, 48, of McPherson, passed away at 9:00 PM, Saturday, July 28th, 2007 while in the company of family members at Wesley Medical Center, Wichita, Sedgwick County, Kansas. Brent Ray Ediger, the son of Wilbur V. and Pearl L. (Weyand) Ediger, was born June 13, 1959 in McPherson, Kansas. He was one of four children born to this union, two sons and two daughters: Doug, Debbie, Brent, and Angie. He attended the McPherson grade schools and graduated from McPherson High School in 1977.On October 13, 2006, Brent was united in marriage to Corazon “Sonie” Conson in McPherson, Kansas where they established their home together. Through the years, Brent worked for Kansas Cylinder Head of McPherson, Burke Energy of Conway, and the National Refinery Association.Brent was a devoted and faithful husband, son, brother, uncle, and friend. His gracious smile and sense of humor will be missed by those who knew and loved him. He was very fond of kids and was not afraid to get down to their level and have fun with them. Brent was especially fond of his nieces and nephews, always looking forward to their visits and times they would share together. He enjoyed spending his time watching the old Andy Griffith shows (black and white only), and spending time with his guinea pig. In recent years, he had enjoyed many nights and weekends with his wife, Sonie, and friends fishing and camping at Marion Reservoir. Brent passed away at 9:00 p.m., Saturday, July 28th, 2007 while in the company of family members at Wesley Medical Center in Wichita. He was 48 years old.Surviving members of his family include his loving and devoted wife, Corazon “Sonie” Ediger, of McPherson, Kansas; his parents, Pearl and Wilbur Ediger, of McPherson, Kansas; his brother, Doug Ediger, of McPherson, Kansas; his sisters, Debbie Johnson and her husband Vaughan, of McPherson and Angie Sevilla and her husband Scott, of Stockton, California; his nephews, Chris Johnson and his wife Grace and Andy Johnson and his wife Becky; his nieces Rachel and Katelyn Sevilla and Sara Richards and her husband J.W.; one great-nephew, Brady Richards; other relatives and a host of friends.Friends are invited to call on Tuesday from 4 to 8 with the family present from 7 to 8 p.m. at Glidden - Ediger Chapel, McPherson, Kansas. The funeral service will be conducted by Reverend Michael Hambley at 11:00 a.m., on Wednesday, August 1, 2007 at the Glidden—Ediger Funeral Home, McPherson, Kansas. Special music “Amazing Grace” and “I Believe“ will be sung by Kris Thompson and accompanied by Emma Perera.The final resting place will be the McPherson Cemetery, McPherson, Kansas.Memorials in memory of Brent are suggested to the American Heart Association.Family request donations to American Heart Association and can be sent in care of the Glidden - Ediger Funeral Home; 222 West Euclid Street; McPherson, Kansas 67460.CASKET BEARERSChris Johnson Vaughan Johnson Andy JohnsonTerry Weyand Terry Gribble Mark Moots

The family of Brent R. Ediger created this Life Tributes page to make it easy to share your memories.