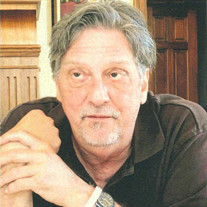 It is with great sadness that we announce the passing of our brother, uncle, and friend, Bryce Eugene Krehbiel on August 18, 2017. Bryce was born in Moundridge on January 27, 1952 to Walter H. and Ethel (Juhnke) Krehbiel. He was the eldest of three children born to this union, one son and two daughters, Bryce, Jamie, and Lori. When Bryce was eight, his family moved to McPherson and he attended the McPherson grade schools, McPherson Junior High and graduated from McPherson High School. He then attended Emporia State College in Emporia, Kansas and Washburn University, Topeka, Kansas, earning his bachelor's degree in communications. Bryce lived and worked in Topeka for many years, working at the Menninger Clinic and Cornerstone of Topeka, Inc., a nonprofit affordable housing organization. Bryce eventually moved to Eugene, Oregon in 1997, where he resided until his death. While in Eugene, Bryce worked for NEDCO and later Lane County, as a property appraiser, specializing in tax appeals. Bryce met many many people along the way, and maintained lifelong friendships, making each person feel appreciated, valued and loved. Bryce enjoyed cooking, gardening, playing golf, painting and music. He was a gifted singer and songwriter, often performing at various locations in and around Eugene, Oregon and Wichita. He counted time spent playing music with friends among his favorite activities. Bryce was preceded in death by his parents, and a nephew, Jackson Mulder. He is survived by his sister, Jamie (Tom) Mulder, of Olathe and Lori (Nick) Vontz, of McPherson; his nieces and nephews, Chance Mulder, Perri Mulder, Nathan Vontz and Zoe Vontz. He will also be missed by his sweet companion, his cat, Otis. A memorial service will be held at 3:00 p.m. on Saturday, September 2, 2017 at the Glidden - Ediger Chapel, McPherson, Kansas. In lieu of flowers, donations may be made to two of Bryce's favorite charities, Habitat for Humanity or McPherson Food Bank and they can be sent in care of the Glidden - Ediger Funeral Home; 222 West Euclid Street; McPherson, Kansas 67460 To honor Bryce's memory, we ask that you love one another, be kind to your neighbor, extend your hand to someone in need.

It is with great sadness that we announce the passing of our brother, uncle, and friend, Bryce Eugene Krehbiel on August 18, 2017. Bryce was born in Moundridge on January 27, 1952 to Walter H. and Ethel (Juhnke) Krehbiel. He was the eldest... View Obituary & Service Information

The family of Bryce Eugene Krehbiel created this Life Tributes page to make it easy to share your memories.

It is with great sadness that we announce the passing of our...

Send flowers to the Krehbiel family.