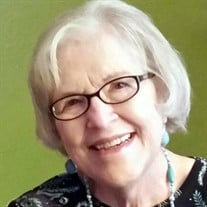 Carlene L. Klatt, 86, of McPherson, Kansas, passed away at 8:08 a.m., Friday, September 7th, 2018 peacefully, at Pine Village, Moundridge. Carlene was born in McPherson, Kansas on March 9, 1932, a daughter of Valetta Lenore (Johnson) Kopelk and Carl Herman Kopelk. Carlene attended the McPherson grade schools and graduated from Topeka High School, Topeka, Kansas in 1950. She was a member of Grace Evangelical Lutheran Church McPherson, Kansas. Carlene was a homemaker and she took great pride in providing for her family in this manner. She also worked as a nurses aide for newborns in St. Louis, Missouri and La Crosse, Wisconsin, and retired from Black & Veatch as an administrative assistant in Overland Park, Kansas. Carlene was a member of Beta Sigma Phi sorority for over 50 years. She enjoyed caring for newborn babies, and children in her role as a foster parent for Lutheran Children and Family Services. Carlene had a love for God, her church, and the McPherson community to which she chose to live out her final years. She made sure all of her children learned how to play and perform music, which impacted their lives in many positive ways. Carlene Loyce Kopelk was united in marriage to Jimmie Van Yowell on May 24, 1953 at Faith Lutheran Church, Topeka, Kansas. This union was blessed with four children, two sons and two daughters: Mark, Gregg, Amy, and Carrie. Carlene was united in marriage to Robert Rosen on October 17, 1992 at Mt. Olive Lutheran Church Overland Park, Kansas. Bob died on January 20, 2011. Carlene was united in marriage to Raymond Klatt on May 12, 2012 at Immanuel Lutheran Church rural Canton, Kansas. Raymond died on May 6, 2014. She is survived by her children, Mark Yowell and wife Gloria, of Tucson, Arizona, Gregg Yowell and wife Cindy, of Overland Park, Kansas, Amy Yowell and life partner Rick Gerics, of Brooklyn, New York, and daughter Carrie Yowell, of McPherson, Kansas; her 7 grandchildren: Jason Guentz, Philip Guentz, Sarah Lewis (Nick), Brock Yowell, Travis Yowell and fiance (Emerald Welch), Lesley Yowell, and Miranda Maslak (Jared); and several beloved great-grandchildren. Carlene was preceded in death by her parents, Carl Kopelk and Valetta Kopelk-Kinder; her husbands, Bob and Raymond. Visitation will be held on Friday, September 21, 2018 from 5 to 7 p.m. at Glidden - Ediger Chapel, McPherson, Kansas. Graveside services will be held at 10:00 a.m. on Saturday, September 22, 2018 at the McPherson Cemetery, McPherson, Kansas. The memorial service will be held at Grace Evangelical Lutheran Church, McPherson, Kansas, at 11:00 a.m. on Saturday, September 22nd, 2018 with Reverend Dale Dumperth officiating. In lieu of flowers, memorial contributions may be made to Grace Evangelical Lutheran Church parking lot fund and they can be sent in care of the Glidden - Ediger Funeral Home; 222 West Euclid Street; McPherson, Kansas 67460.

The family of Carlene L. Klatt created this Life Tributes page to make it easy to share your memories.

Send flowers to the Klatt family.