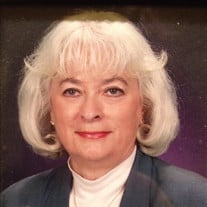 Carol May Sendelbach, 87, of McPherson, Kansas, transitioned peacefully, Monday April 22, while in the company of her children at The Cedars House. Carol was born in Great Falls, Montana on January 27, 1932, daughter of Catherine (Hays) and Harry E. Noel of Montana. The family moved to Missoula, Montana while she was in elementary school, and they spent many joyous times at the family cabin on Flathead Lake. Carol led a fulfilling life loving family, spending time with friends, feeding the backyard animals, caring for her kitties, shopping, clothes, jewelry, knitting, crocheting, and chocolate. In 1960 while living in Moses Lake, Washington, she met Frank Carl Sendelbach and was married on August 23, 1961 in Ephrata, Washington. They initially moved to the San Francisco Bay Area, to raise their family in Los Altos. They were blessed with three children, Frank Michael Sendelbach of Kansas, Cheryl Katherine (Sendelbach) Tedesco (David) of California, and Melissa Ann Sendelbach of California. Frank retired in 1977 and they relocated to Oroville, California. In 2000, Carol made her final home in McPherson, Kansas. She is survived by her children and her grandchildren, Colton and Faith Tedesco. Carol was preceded in death by her husband Frank Carl Sendelbach, parents and brother Harry E. Noel, Jr. of Montana. Carol will always be remembered for her unconditional love for her children and grandchildren, kindness, beauty, patience, and as our greatest role model leading us by her calm and strong demeanor. With her beautiful smile and her compassionate disposition, Carol left the world a better place. She will be greatly missed. In lieu of flowers, donations may be made in Carol’s name to Hospice & Homecare of Reno County.

Carol May Sendelbach, 87, of McPherson, Kansas, transitioned peacefully, Monday April 22, while in the company of her children at The Cedars House. Carol was born in Great Falls, Montana on January 27, 1932, daughter of Catherine (Hays) and... View Obituary & Service Information

The family of Carol M. Sendelbach created this Life Tributes page to make it easy to share your memories.

Send flowers to the Sendelbach family.