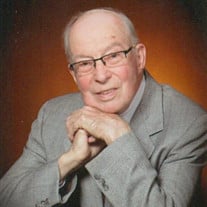 Carroll Dean Winslow, 92, of McPherson, Kansas, passed away at 4:47 a.m., Tuesday, October 30th, peacefully, at Loving Care of McPherson. Carroll was born in Esbon, Kansas on August 1, 1926, a son of Estelle Lee (Thompson) and Forrest William "Hap" Winslow. Carroll attended the Esbon, Marion, and McPherson Schools and graduated from McPherson High School, McPherson, Kansas in 1945. He then attended McPherson College, McPherson, Kansas. He was a member of First United Methodist Church McPherson, KS. Carroll honorably served in the U.S. Army as a Cpl in WW II. He received the W.W.II Victory Medal, Army of Occupation Medal. Carroll worked for his father in his Nash Dealership while in school. He was an accountant for Floyd E. Lietz Public Accountant, McPherson. When Floyd died, Carroll purchased the business adn change the name to Carroll D. Winslow Accounting from which he retired in 2001. Carroll was a member of the Kansas State Accounting Association, and was a Past President and numerous other accounting associations, the McPherson Opera House where he was Past President and was Secretary and Treasurer for many years, was a member of the Hutchinson Horseless Carriage Club. Carroll enjoyed collecting and restoring antique cars, riding around town and watching all the developments and construction going on, and enjoyed history very much. Carroll spent many hours gathering his families history and ancestry and was well read on the Winslow's who came over on the Mayflower. Carroll Dean Winslow was united in marriage to Virginia Lee Maher on October 2, 1960 at the First United Methodist Church, McPherson, Kansas. He is survived by his sisters, Dorothy Mae Meltzer, of Franklin, Nebraska and Pearl Elaine Crippen, of Grain Valley, Missouri; his aunt, Athelda Thompson, of Superior, Nebraska; his nephews and nieces, Larry Meltzer, of Smith Center, Kansas, David Meltzer, of Jacksonville, Florida, Ed Crippen, of Atlanta, Georgia, Brenda Burnfin, of Raymore, Missouri, Christine Carroll, of Oklahoma City, Oklahoma, Merrilee McGee, of Independence, Missouri, Rick Winslow, of Marquette, Kansas, James "Jim" Winslow, of Marquette, Kansas, and Bruce Winslow, of Moundridge, Kansas. Carroll was preceded in death by his parents, Estelle and Hap Winslow; brothers, Robert Eugene and Gerald Lee; his wife Virginia; nephew, Lee Winslow and niece Rene Korbe. Friends are invited to call on Thursday, November 1, 2018 from 5 to 7 p.m. at Glidden - Ediger Funeral Home, McPherson. Funeral service will be held at First United Methodist Church, McPherson, Kansas, at 2:00 p.m. on Friday, November 2nd, 2018 with Reverend Karen Rice-Ratzlaff officiating. Burial will be in the McPherson Cemetery, McPherson, Kansas with military honors presented by members of the American Legion Post 24 and Veterans of Foreign Wars Post 2715 both of McPherson. In lieu of flowers, memorial contributions may be made to First United Methodist Church Bell Choir or Kindred Hospice and they can be sent in care of the Glidden - Ediger Funeral Home; 222 West Euclid Street; McPherson, Kansas 67460.

The family of Carroll Dean Winslow created this Life Tributes page to make it easy to share your memories.

Carroll Dean Winslow, 92, of McPherson, Kansas, passed away at...

Send flowers to the Winslow family.