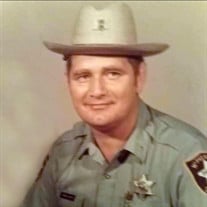 Charles Edgar "Charlie" Burch, 87, of McPherson, KS passed away Saturday, September 4th, 2021 peacefully, at Salem Home, Hillsboro, Kansas. Charlie was born in Granola, Kansas on March 30, 1934, a son of Esther Elizabeth (Halfhill) and Edgar A. Burch. Charlie attended the Roxbury grade school and graduated from Roxbury High School, Roxbury, Kansas in 1952. He occasionally attended Countryside Covenant Church with his daughter Molly. Charlie entered into the United States Navy on May 27, 1952 at Kansas City, Missouri and honorably served during the Korean War and was discharged on May 22, 1956. He received the National Defense Service Medal and his most significant duty assignment was U.S. Navrecsta Pearl Harbor, T.H. He served on the USS Moore and USS Wettaburn. He also earned the Realm of the Golden Dragon Card. Charles "Charlie" Edgar Burch was united in marriage to Gloria Rulona on May 9, 1954 in Kailua, Hawaii. The young couple established their first home together in McPherson. This union was blessed with the birth of five children, three daughters and two sons, Teresa, Charles Jr., Gloria Jean, Vaughan and Molly. Gloria died on February 3, 2019. Through the years Charlie worked for Kenneth Moone of Roxbury, Kansas as a Farm Hand, the city of McPherson as a Police officer and for the McPherson Park Department for 13 years before working for the County in the Sheriff's office for 17 years. He then began working for the McPherson County Public Works Department from which he retired in 1993. Charlie was a member of IOOF, and the Kansas Sheriff's Association. He enjoyed dogs, horses, growing plants, and loved his family. He also liked to cook and he canned the vegetables he grew. He also spent time watching Tv, especially The Pioneer Woman. Charlie served as an armed color guard under President Eisenhower and was Bob Dole's personal driver while visiting McPherson County. He is survived by his children, Teresa Mandevill, of Bluff City, Kansas, Charles Burch, Jr. and wife Miriam, of Baldwin City, Kansas, Gloria Jean Vernon and husband Larry, of McPherson, Kansas, Vaughan Burch and wife Jennifer, of McPherson, Kansas, and Molly Stucky and husband Dale, of McPherson, Kansas; his sisters, Ruth "Liz" Anderson and husband Carl, of Big Drake, Colorado and Margaret Zimmerman and husband Elmer, of McPherson, Kansas; his 14 grandchildren; 24 great-grandchildren; and a great-great-granddaughter; several nieces and nephews, other relatives and a host of friends. Charlie was preceded in death by his parents; his wife Gloira; a granddaughter, Heather Burch and sister, Donna Lunt. A memorial service will be held at Glidden - Ediger Chapel, McPherson, Kansas, at 2:00 p.m. on Friday, September 17th. Burial will be at the McPherson Cemetery McPherson, Kansas with members of the American Legion Post 24, Veterans of Foreign Wars Post 2715, and Mark Casebeer providing military honors. In lieu of flowers, memorial contributions may be made to Friends of Maxwell or McPherson County Sheriff's Office Benefit fund and they can be sent in care of the Glidden - Ediger Funeral Home; 222 West Euclid Street; McPherson, Kansas 67460.

The family of Charles Edgar Burch created this Life Tributes page to make it easy to share your memories.

Send flowers to the Burch family.