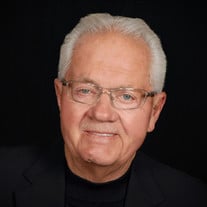 Life of Charles "Charlie" E. Coup Parents of Charlie were Angeline Ferguson and Willard Coup. Charlie was born in Odessa, Texas on October 26, 1939. He was raised by his mother in Austin, Texas until Charlie moved to Windom, Kansas at the age of 17 to live with his dad on the family homestead. Charlie was an only child coincidently as his father and grand-father were only children. Charlie is survived by wife Phyllis and two daughters, Terrie Perkins (Steve) and Mikki Stover (Jeff), five grandchildren and ten great grandchildren. Charlie and Phyllis were married June 28, 1974 in McPherson and moved to Enid, Oklahoma in August 1977. Following his retirement in 2014 Charlie and Phyllis moved to Maize, Kansas. Charlie was athletic and played as full back for Windom H.S., on an eight-man football team going undefeated for 3 years, graduating in 1959. After High School Charlie joined the Air Force assigned to a Military Air Transportation Service (MATS) serving in a C-130 squadron in Okinawa, Japan. He then returned to McPherson County to take various jobs. He worked at the local rock quarry where he became a self-professed “dynamite expert.” He worked at Atlas missile underground site and McPherson city power plant. For 51 years, he worked as a sales and service representative specializing in oil and gas industrial engines. Charlie lived life to its fullest. He worked hard so he could play hard. People naturally wanted to be around Charlie to have a good time. He loved motorcycles, cars especially corvettes, trucks and boats. His passion led to owning many! Charlie was happiest when he could share those passions with family and friends. He loved water and enjoyed lakes and swimming pools. He loved people to drop in for socializing. Charlie was an impeccable dresser; his style was his own including fine jewelry, silk shirts and red leather loafers. He also loved music and wanted to know if you had heard the latest songs by his favorite artists. He always had music playing on the boats and pool side. Charlie touched the lives of many and he loved to be around people. He could talk with anyone and make them feel at home. He did not pretend. Charlie would B.S. with the best of us. He made quick friends with many of his physicians, telling them that he missed his calling and should have been a doctor! Doctor Charlie Coup. Family was very important to Charlie. He was kind and generous sharing life gifts with his family and friends. Charlie and Phyllis are members of the Chapel Hill Methodist Church, Wichita, Kansas and were baptized there in 2016. A Celebration of Life service will be held March 10th at Chapel Hill Methodist Church 1550 N Chapel Hill Drive, Wichita, Kansas 67206 at 1:00 PM. A memorial has been established with Chapel Hill Methodist Church and they can be mailed to Glidden - Ediger Funeral Home; 222 West Euclid Street; McPherson, Kansas 67460.

Life of Charles "Charlie" E. Coup Parents of Charlie were Angeline Ferguson and Willard Coup. Charlie was born in Odessa, Texas on October 26, 1939. He was raised by his mother in Austin, Texas until Charlie moved to Windom, Kansas at the... View Obituary & Service Information

The family of Charles Edwin Coup created this Life Tributes page to make it easy to share your memories.

Parents of Charlie were Angeline...

Send flowers to the Coup family.