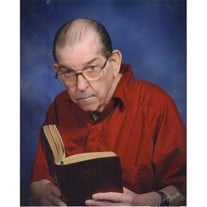 Charles A. 'Goodtime Charlie' Ruland, Sr., 77, of McPherson, Kansas, passed away at 12:05 p.m., Wednesday, January 1, 2014, at Hospice House, Hutchinson, Reno County. Charles Arthur “Goodtime Charlie” Ruland, Sr., the son of Amos Andy and Lucille (Morris) Ruland, was born December 8, 1936 in Fort Morgan, Colorado. He was one of seven children born to this union, six sons and one daughter, William “Suggs”, James “Jim”, Shirley, Charlie, Andy, Wade, and Steve. He attended high school at Worden, Montana, the Huntley Project School.Through the years, Charlie worked for the family business in the oil fields in Montana and later in Colorado.Charlie was united in marriage to his high school sweet heart, Janet Berlene Neel at Montana. This union was blessed with the birth of two children, Deborah and Charles, Jr. “Chuck”.Charlie began a career as a traveling salesman, which lead to the job he loved the most, selling encyclopedias in Texas. He was a very talented salesman and enjoyed traveling around meeting new people.Charlie was later united in marriage to Patricia Rose. This union was blessed with the birth of two children, Lunita “Nita” and Dave.Charlie continued to work as a traveling salesman until 1985, when he became disabled. He then moved to McPherson, Kansas to be closer to family. Charlie joined the Calvary Baptist Church and was a faithful member.Charlie was a Christian, loving and caring father, grandfather, great-grandfather, brother, uncle, and dear friend. His wise counsel, gracious smile, sense of humor, and all those stories that he loved to tell will be missed by those who knew and loved him. He was very proud of his children and always wanted the best for them. Charlie was especially fond of his grand children and great-grandchildren, always looking forward to their visits and times they would share together. In his younger years, Charlie was a golden gloves boxer and was undefeated for his first 12 fights and lost the 13th fight and only remembered the first 2 rounds as told by Charlie. In his later years, he became a talented chess and checkers player, challenging any visitor to a round. He enjoyed watching television, telling stories, reading and writing poetry. He especially loved the work of Robert Service and could recite many of his poems with great theatrical enthusiasm. He spent many hours painting and did two large murals one in San Antonio, Texas and the other in Corpus Christi, Texas.Charlie A. 'Goodtime Charlie' Ruland, Sr., 77, of McPherson, Kansas, passed away at 12:05 p.m., Wednesday, January 1, 2014 while in the company of family members, at Hospice House, Hutchinson, Kansas. Charlie was preceded in death by his parents; 1 sister Shirley, and 4 brothers, William 'Suggs', Andy, Wade and Steve Ruland.Surviving family members include his children, Deborah Baerg and her husband Dale, of Inman, Kansas, Charles 'Chuck' Ruland, Jr. and his wife Terri, of Wichita, Kansas, Lunita 'Nita' Warren, of Billings, Montana and Dave Skinner and his wife Deanne, of Billings, Montana; his brother, James 'Jim' Ruland and his wife Jo, of Worden, Montana; many grandchildren and great-grandchildren; several nieces and nephews, other relatives and host of friends.Friends are invited to call on Friday, January 10, 2014 from 4 to 7 p.m. with family present from 5 to 7 p.m. at the Glidden - Ediger Chapel, McPherson, Kansas. The funeral service will be held at 11:00 a.m., on Saturday, January 11, 2014 at the Calvary Baptist Church with Reverend Dan Cate officiating. Special music “Amazing Grace My Chains Are Gone” and “On Eagles Wings” will be played. The final resting place will be at the North Inman Cemetery, Inman, Kansas at a later date.Memorial contributions may be given to Charlie Ruland, Sr. memorial fund, Calvary Baptist Church, or Hospice of Reno and McPherson County and they can be sent in care of the Glidden - Ediger Funeral Home; 222 West Euclid Street; McPherson, Kansas 67460.CASKET BEARERSDustin Baerg Denton Baerg Corey Ruland Chad Ruland Josh Ruland Brandon Wishard Bradley MillerUSHERSGary Clifton, Sr. Lavern Weyand

The family of Charles A. Goodtime Charlie' Ruland, Sr. created this Life Tributes page to make it easy to share your memories.