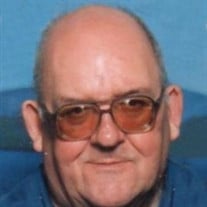 Charles Robert Hall, 83, of McPherson, Kansas, passed away at 5:07 p.m., Tuesday, September 18th, 2018 while in the company of family members, at McPherson Hospital. Charles was born in McPherson, Kansas on October 5, 1934, a son of Emma Marie (Hall) Hall. Charles attended Roosevelt grade school, McPherson Junior High, and graduated from McPherson High School, McPherson, Kansas in 1953. He then attended Stevenson Auto Mechanic School in Kansas City, Missouri. He was a member of Crossroads Assembly of God McPherson, KS. Charles worked for Ben Robinson Auto as a new car set up mechanic, was a Correctional Officer for the Kansas Correction Center in Hutchinson, Kansas, and retired as a truck driver for Groendyke Transport, Kansas Transport, and Tinoa Trucking. After retirement he worked as a dishwasher for McPherson College and The Cedars Health Care both of McPherson. Charles Robert Hall was married to Etta Imogene McGann in 1956 and was divorced in 1961. To this marriage 3 children were born, Chris Rodney, Vanessa Robin and Marrisa Dawn. Charles was united in marriage to Judith I. Mitzelfelt on October 19, 1961 at Raton, New Mexico. To this union, Charles was blessed with 3 more children, Debra Ann, Brinda Lynn, and Charles Randall. Judith died on August 28, 2015. He is survived by his children: Chris Rodney McFadden and wife Debra, of Marion, Kansas, Robin Abbott, of Hillsboro, Texas, Marissa Sockwell and husband Bill, of Oklahoma City, Oklahoma, Debra Taylor, of McPherson, Kansas, and Brinda George and her significant other Scott Peterson, of McPherson, Kansas; his half sisters, Linda Chilson, of McPherson, Kansas and Lodene Cooper, of Houston, Texas; his 18 grandchildren; 33 great-grandchildren 3 great-great-grandchildren; several nieces and nephews, other relatives and a host of friends. Charles was preceded in death by his mom, Emma Marie Hall-Shawly, his grandparents Rose and Jesper Hall, his son, Charles Randall Hall, his wife, Judith Hall; and his granddaughter, Breanna Lynn George. Visitation will be held on Sunday, September 23, 2018 from 2:00 to 4:00 p.m. at Glidden - Ediger Chapel, McPherson. Funeral service will be held at Glidden - Ediger Chapel, McPherson, KS, at 10:30 a.m. on Monday, September 24th, 2018 with Pastor Terry Turner officiating. Burial will take place at the McPherson Cemetery McPherson, KS. In lieu of flowers, memorial contributions may be made to St. Judes Children's Hospital and they can be sent in care of the Glidden-Ediger Funeral Home; 222 West Euclid Street; McPherson, Kansas 67460.

Charles Robert Hall, 83, of McPherson, Kansas, passed away at 5:07 p.m., Tuesday, September 18th, 2018 while in the company of family members, at McPherson Hospital. Charles was born in McPherson, Kansas on October 5, 1934, a son of Emma Marie... View Obituary & Service Information

The family of Charles Robert Hall created this Life Tributes page to make it easy to share your memories.

Charles Robert Hall, 83, of McPherson, Kansas, passed away at...

Send flowers to the Hall family.