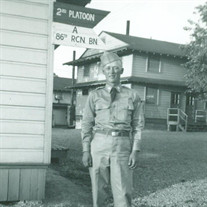 Charles Roger Lindblade, 90, of McPherson, KS, passed away at 8:40 a.m., Saturday, October 3rd, peacefully, at McPherson Hospital. Roger was born on his parents farm, rural McPherson, Kansas on November 18, 1929, a son of Mable Matilda (Johnson) and Charles Arthur Lindblade. Roger attended North Union Country school through the 8th grade and then attended and graduated from McPherson High School, McPherson, Kansas in 1947. He was a member of New Gottland Covenant Church McPherson, Kansas, where he served as usher for many years. Charles Roger Lindblade was united in marriage to Rosellen M. Straka on July 10, 1955 at the First Congregational United Church of Christ, McPherson, Kansas. The young couple established their first home together in McPherson. This union was blessed with the birth of three children, two sons and one daughter, Michael, Kenneth, and Judy. Rosellen died on May 24, 2020. He honorably served in the U.S. Army as a Pfc. Roger was a Pipefitter at National Cooperative Refinery Association now known as CHS McPherson, Kansas for 35 years. He was a member of the American Legion Post 24, and the Kiwanis Club both of McPherson, Kansas. Roger enjoyed walking, playing golf, reading, working crossword puzzles, building model ships, fishing, traveling, and spending time with his family. Roger is survived by his children, Michael Owen Lindblade, of McPherson, Kansas, Kenneth Dean Lindblade, of McPherson, Kansas, and Judy Ellen Moore and husband Steve, of Olathe, Kansas; his three grandchildren, Lindsey Moore, Abbie Geissler and husband Tyler and Grant Moore; one great-grandson, Noah Geissler; nieces and nephews, other relatives and a host of friends. He was preceded in death by his parents; and sister Betty Gibson and brother Wendall Lindblade and his wife Rosellen Lindblade. Graveside service will be held at McPherson Cemetery, McPherson, Kansas, at 11:00 a.m. on Friday, October 9th, 2020 with Pastor Dan Parry officiating. Military honors will be presented by members of the American Legion Post 24 and Veterans of Foreign Wars Post 2715. Memorial contributions may be given to New Gottland Covenant Church in memory of Roger and they can be sent to Glidden - Ediger Funeral Home; 222 West Euclid Street; McPherson, Kansas 67460.

The family of Charles Roger Lindblade created this Life Tributes page to make it easy to share your memories.

Charles Roger Lindblade, 90, of McPherson, KS, passed away at...

Send flowers to the Lindblade family.