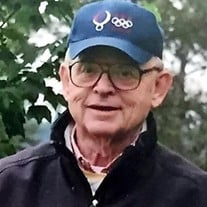 Charles Francis "Chuck" Self, Sr., 77, of Hillsboro, Oregon, passed away Saturday, March 16th, 2019 at his residence in Cuenca, Ecuador.   Charles was born in Kansas City, Kansas on December 11, 1941, a son of Fern (Downing) and Lewis Francis Self.   Charles attended the Kansas City Kansas Public School System graduating from Wyandott High School in 1960.  He then attended Kansas City Kansas Community College, and graduated from Johnson County Community College, Overland Park, Kansas.  Charles then attended Emporia State University, Emporia, Kansas.  He received his Ph.D. in Education from Kansas State University, Manhattan, Kansas.  Charles F. "Chuck" Self, Sr. was united in marriage to Elfriede "Effie" Bunk on August 30, 1969 at the First Christian Church in McPherson, Kansas.  The young couple through the years made their home in communities in Kansas, Alaska, New Mexico, Oregon, Tennessee, and Missouri before returning to Oregon where they have resided until 2017 after Effie's death.   Charles was a member of the Presbyterian Church and the Methodist Church throughout his life.   Through the years Charles worked as a marketing teacher at Basehor High School in Basehor, Kansas; principal of a vocational school in Alaska; and assistant director at Beloit Vocational School in Beloit, Kansas. He also taught at the Alaska Community College; worked for the Wilye Book Company as a sales representative in Oregon; worked for the Corrections Corporation of America as a principal; and in vocational education for the Tennessee Department of Education. Chuck retired from the Tennessee Department of Corrections where he was a teacher and principal.   Charles was a member of several Dog Clubs and was involved with the Boy Scouts of America where he served in several capacities.  Charles enjoyed fly-fishing, his canine companions, his family, teaching and traveling.    He is survived by his daughter, Connie Campfield and husband Joseph, of Kingsville, Missouri, his son, Charles F. "Butch" Self, Jr. and wife Denise, of Gresham, Oregon; his brother, David Lewis and wife Virgie, of Shawnee Mission, Kansas; his grandchildren, Jeremy Wedel of Newton, Jeanne Eskeli and her husband John of Wichita, Kansas, Tyler Self of New Braunfels, Texas, and Joshua Self of Gresham, Oregon; his great-grandson, Beau Eskeli; several nieces and nephews, other relatives and a host of friends.   Charles was preceded in death by his parents; his son, Delbert "Del" Wedel; his sister Lois Jean Growing; and his wife, Elfriede “Effie” Self.   Graveside service will be held at 11:00 a.m. on Monday, May 6, 2019 at McPherson Cemetery, McPherson, KS, with Parish Minister Associate Wally Bunk officiating.   In lieu of flowers, memorial contributions may be made to Elim Lutheran Church, Marquette, Kansas and they can be sent in care of the Glidden - Ediger Funeral Home; 222 West Euclid Street; McPherson, Kansas 67460.

Charles Francis "Chuck" Self, Sr., 77, of Hillsboro, Oregon, passed away Saturday, March 16th, 2019 at his residence in Cuenca, Ecuador.   Charles was born in Kansas City, Kansas on December 11, 1941, a son of Fern (Downing) and Lewis Francis... View Obituary & Service Information

The family of Charles F. Self, Sr. created this Life Tributes page to make it easy to share your memories.

Send flowers to the Self, Sr. family.