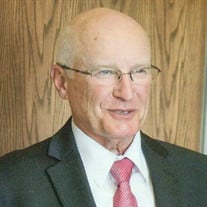 Charles A. "Charlie" Wedel, 70, of Galva, Kansas, passed away at 12:21 a.m., Sunday, February 26th, 2017 while in the company of family members, at University of Kansas Hospital, Kansas City, Kansas. Charles was born in McPherson, Kansas on December 25, 1946, a son of Mary Lucile (Hedin) and Irby J. Wedel. Charles attended the Lily, Liberty, and United Center country schools and graduated from Galva High School, Galva, Kansas. He was attending First Christian Church McPherson, Kansas. Charlie worked at Farmland Industries for 22 years in the warehouse as an inventory controller and then worked for N.C.R.A., now known as CHS for 20 years as an operator in the OIP Unit, retiring in 2011. Charlie loved his family and enjoyed playing golf, softball and watching sports of all kinds. He especially enjoyed KU Basketball, the Royals Baseball and Chief's Football, and was his grandchildren's biggest fan. Charles Allyn Wedel was united in marriage to Gail L. Ek on July 6, 1965, Galva, Kansas. The young couple established their first home together in Galva, Kansas. He is survived by his loving and devoted wife of over 51 years, Gail Wedel, of Galva, Kansas; his children, Ty Wedel and his wife Kimberly, of McPherson, Kansas, Kristin Sangals and her husband Craig, of El Dorado, Kansas, and Keri Welch and her husband Kirk, of Scottsdale, Arizona; his siblings, Dennis Wedel and his wife Linda, of Canton, Kansas, Rita Ek, of Hutchinson, Kansas, Debra Heitzenrater and her husband Bill, of Towanda, Kansas, Karla Jones and her husband Galen, of Canton, Kansas, and Dale Wedel, of Inman, Kansas; his four grandchildren, Zachary Sangals, Caden Sangals, Tanner Wedel and Ariel Wedel. Friends are invited to visit with the family on Thursday, March 2, 2017 from 5 to 7 p.m. at Glidden - Ediger Chapel, McPherson, Kansas. The memorial service will be held at First Christian Church, McPherson, Kansas, at 11:00 a.m. on Friday, March 3rd, 2017 with Pastor Lynn Scott officiating. The final resting place will at the Empire Cemetery Galva, Kansas. In lieu of flowers, memorial contributions may be made to Friendship Inn or Kansas School for the Deaf and they can be sent in care of the Glidden - Ediger Funeral Home; 222 West Euclid Street; McPherson, Kansas 67460.

Charles A. "Charlie" Wedel, 70, of Galva, Kansas, passed away at 12:21 a.m., Sunday, February 26th, 2017 while in the company of family members, at University of Kansas Hospital, Kansas City, Kansas. Charles was born in McPherson, Kansas on... View Obituary & Service Information

The family of Charles A. "Charlie" Wedel created this Life Tributes page to make it easy to share your memories.

Send flowers to the Wedel family.