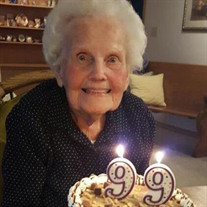 Charlotte A. Vetter, 99, of McPherson, Kansas, passed away on Friday, February 24, 2017 while in the company of family members, at M.T.M. Boarding Care Home, McPherson. Charlotte Augusta Ortlund Vetter, the daughter of Julius Benjamin and Minnie (Nelson) Ortlund, was born on January 26, 1918 in Des Moines, Iowa. She was one of five born to this union, three sons and two daughters, Donald, Robert, Charlotte, Jeanne and Ray. Charlotte attended and graduated from East High School, Des Moines, Iowa in 1936. Charlotte was united in marriage to Jack R. Vetter on March 27, 1944 in Memphis, Tennessee. While travelling back home to Kansas City, Jack’s ticket purchase from Charlotte at the United Airlines counter in Des Moines was the beginning moment of their 68-year romance. The young couple established their first home in Cedar Rapids, Iowa. This union was blessed with the birth of four children, three sons and one daughter, Marcia, Jack Jr., Steven and Chuck. Charlotte was a homemaker and took great pride in providing for her family. She later worked in the office of Dr. Brandsted, USD 418, and the library at McPherson High School. She was a faithful member of Countryside Covenant Church, serving in many capacities throughout the years. Additionally, Charlotte was instrumental in the establishment of a Christian Women’s’ Club chapter, a ministry which enriched the lives of many. Charlotte was a loving and caring wife, mother, grandmother, great-grandmother, sister, aunt, and dear friend. She always had time to share a conversation with a cup of coffee and her signature brownies or sweet rolls. Her wise counsel, gentle guidance, and gracious smile will be missed by those who knew and loved her. The joy of her life was her family, and she was thrilled to watch it grow with the addition of spouses, grandchildren and great grandchildren. Charlotte passed away on February 24, 2017 surrounded by family. We are grateful for the last four years of tender loving care given by Mike and Marla Tolbert who we cherish as family. Her parents, Ben and Minnie, husband Jack, sons Jack Jr. and Steven, three brothers and one sister preceded her in death. Surviving family members include her children, Marcia Ecker (Ted) of S. Barrington, IL and Chuck Vetter (Taryn) of McPherson, KS; her eight grandchildren, Jack Ecker (Andrea), Kira Johnson (Jeff), Benj Ecker (Marit), Jon Ecker (Angie), Chuck Vetter (Yaz), Sam Vetter (Kelly), Johanna Vetter and Nelson Vetter; 11 great grandchildren, Maeve, Nat and Otto Johnson, Amelia, Elijah, Christian and Jacob Ecker, Axel and Charlotte Ecker, Scarlott and Jonas Ecker; nieces and nephews and a host of friends. Memorial service will be held at 11:00 a.m., on Saturday, March 4, 2017 at Countryside Covenant Church, McPherson, Kansas, with Reverend Jon Black officiating. The final resting place will be at the McPherson Cemetery McPherson, Kansas. Memorial contributions may be given to Countryside Covenant Church or North Park University, Chicago, Ill. and they can be sent in care of the Glidden - Ediger Funeral Home; 222 West Euclid Street; McPherson, Kansas 67460.

Charlotte A. Vetter, 99, of McPherson, Kansas, passed away on Friday, February 24, 2017 while in the company of family members, at M.T.M. Boarding Care Home, McPherson. Charlotte Augusta Ortlund Vetter, the daughter of Julius Benjamin and... View Obituary & Service Information

The family of Charlotte A. Vetter created this Life Tributes page to make it easy to share your memories.

Charlotte A. Vetter, 99, of McPherson, Kansas, passed away on...

Send flowers to the Vetter family.