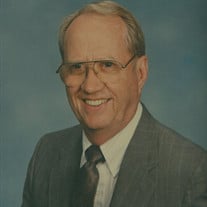 Chester Truman Chet Houghton, 99, of McPherson, Kansas, passed away at 7:10 a.m., Tuesday, February 27th, 2018 while in the company of family members, at the Cedars House. Chet was born in Rural Roxbury near Twin Mounds on his parents homestead on the kitchen table, on November 18, 1918, the son of Martina (Holmberg) and Truman Hulbert Houghton, Jr. Chet attended the Roxbury schools and graduated from Roxbury High School in 1936. After the bombing of Pearl Harbor in 1941, Chet chose to be a member of the Army Air Corps later to become known as the Air Force. Chet was an airplane mechanic and he was the group leader of a squadron that rebuilt airplanes used in the war effort. He was a member of Trinity Lutheran Church McPherson, Kansas. He served in the U.S. Army Air Corp as a Tec Sargent. Chet was an employee of the McPherson Board of Public Utilities and worked there until 1968. Always an entrepreneur, Chet with two friends, Robert (Roy) Swick and Virgil Anderson founded a company, Central Plastics, Inc. At this time not knowing the company would succeed, Fred Diehl, the general manager of the BPU had the BPU employee manual changed to include a statement that if in one year if the new company would not survive, Chet would regain his job at the BPU. For this kindness, Chet was forever grateful to Fred Diehl, his boss that he admired. Chet was a past treasurer of Troop 133 and in 2000, he was selected as Kansas Small Business Person of the year 2000 by the Small Business Administration. Chet for most of his life was a hobby farmer with his land being part of his old home place. He was an excellent mechanic and could fix anything, as well as having a knowledge of low and high voltage electricity. Chet was a member of the American Legion Post 24, McPherson, Kansas. Chet enjoyed his work, spending time outside especially at his farm, working in his yard and spending time with his boys and his family. He always had a smile, and never met a stranger. He lived his last seven years and two days at the Cedars. While at the Cedars, he entertained many residents with his singing. He had tremendously good care by the staff and the family appreciates his time there. Chester T. Houghton was united in marriage to Betty Jane Peterson on December 1, 1946 at Lindsborg, Kansas. The young couple established their first home together in McPherson, Kansas. His wife Betty, died on January 13, 1987 while on vacation in Silver City, New Mexico. Chet was united in marriage to Fern (Anderson) Crowther on February 14, 1990. Fern passed away May 30, 2008 He is survived by his sons, Dennis C. Houghton and wife Betty L, Mark C. Houghton, and Kent J. Houghton and wife Mary Kay, all of McPherson, Kansas; his 10 grandchildren - Eric Houghton(Carrie), John Houghton(LiQiu), Timothy Houghton, James Houghton, Allison Houghton, Marcus Houghton(Corbin), Hannah Nesbitt(Dan), Drew Hoffman(Danyel), Paige Moore(Matt), and Caleb Houghton 10 great-grandchildren Jake Houghton, Jack Houghton, Julia Houghton, Kamy MacBeth, Kenzy MacBeth, Krosby MacBeth, Kruze Nesbitt, Addison Chapman, Colt Chapman, and Brody Hoffman. other relatives and a host of friends. Chet was preceded in death by his parents, his wives Betty J. and Fern Houghton, and his twin brother Leonard Houghton who was born minutes after Chester and his older brother Martin, who died at the age of 18 from appendicitis. Friends are invited to call on Thursday March 1, 2018 from 8:30 a.m. to 10 a.m. at Trinity Lutheran Church, McPherson. The funeral service will be held at Trinity Lutheran Church, McPherson, Kansas, at 10:00 a.m. on Thursday, March 1st, with The Reverend Tim Leaf officiating. Burial service will follow the service at the Elmwood Cemetery Lindsborg, Kansas with military honors presented by members of the American Legion Post 24 and Veterans of Foreign Wars Post 2715 McPherson. In lieu of flowers, memorial contributions may be made to Trinity Lutheran Church and they can be sent in care of The Glidden - Ediger Funeral Home; 222 West Euclid Street; McPherson, Kansas 67460.

Chester Truman Chet Houghton, 99, of McPherson, Kansas, passed away at 7:10 a.m., Tuesday, February 27th, 2018 while in the company of family members, at the Cedars House. Chet was born in Rural Roxbury near Twin Mounds on his parents homestead... View Obituary & Service Information

The family of Chester Truman Houghton created this Life Tributes page to make it easy to share your memories.

Send flowers to the Houghton family.