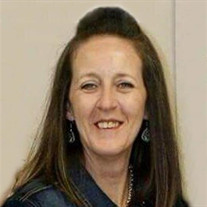 Christina Renae Miller, 45, of Canton, Kansas, passed away at 2:50 p.m., Tuesday, May 22nd, 2018 due to injuries received in an automobile accident just South of 150th Road on K-15 Highway in Marion County, rural Goessel, Kansas. Christina was born in Mount Pleasant, Iowa on January 26, 1973, a daughter of William Verle and Linda Marie (Jacobs) Cairns Christina attended Canton-Galva grade school and graduated from Canton-Galva High School, Canton, Kansas in 1991. She then attended Hutchinson Community College, Hutchinson, Kansas. She was Baptized with her husband in the First Baptist Church in Newton, Kansas. Since Christina was 16 she worked as a CMA-Caregiver. Her first job was with Shiloh Manor, Canton, Kansas and later worked for Bethesda Home, Goessel, Kansas where she spent 29 years caring for others. Christina enjoyed spending time with her family and grandson, motorcycles, fishing and taking care of her second family at Bethesda Home in Goessel, Kansas. She loved to make people smile. Christina was a devoted grandmother and was a second mother to many and loved by all. Christina Renae Cairns was united in marriage to Nick Miller on October 17, 1992 in Newton, Kansas. The young couple established their first home together in Canton. This union was blessed with the birth of two boys, Tyler and Christopher "Boo". She is survived by her loving and devoted husband of twenty-five years Nick Miller, of Canton, Kansas; her sons, Tyler Miller and his wife Taryn, of McPherson, Kansas and Christopher Miller, of Canton, Kansas; her mother Linda Cairns, of Napa Junction Oregon; her sisters Melinda Cairns, of McPherson, Kansas; Billie Jo Cairns and her husband Larry, of Inman, Kansas and Jennifer Lansaw and her husband Andrew, of McPherson, Kansas; her grandson Trace Miller, of McPherson, Kansas, other relatives and a host of friends. Christina was preceded in death by her father William Cairns. Visitation will be held on Monday, May 28, 2018 from 4:00 p.m. - 6:00 p.m. at Glidden - Ediger Funeral Chapel. Funeral service will be held on Tuesday, May 29, 2018 at 10:30 a.m. at Glidden - Ediger Chapel, McPherson, Kansas with Pastor Brad Penner officiating. Burial will be at the Canton Township Cemetery Canton, Kansas. In lieu of flowers, memorial contributions may be made to Bethesda Home and they can be sent in care of Glidden-Ediger Funeral Home; 222 West Euclid St.; McPherson, Kansas 67460.

The family of Christina Renae Miller created this Life Tributes page to make it easy to share your memories.

Christina Renae Miller, 45, of Canton, Kansas, passed away at...