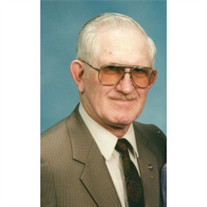 Clarence L. Wegele, 83, of McPherson, Kansas, passed away at 9:49 a.m., Monday, March 24, 2014 while in the company of family members, at his home. Clarence L. Wegele, the son of Alexander and Marie (Zimmerman) Wegele, was born December 11, 1930 in rural Hoisington, Barton County, Kansas. He was one of six children born to this union, four sons and two daughters, John, Leslie, Wilmer, Clarence, Esther, and Elsie. Clarence attended and graduated from Hoisington High School, Hoisington, Kansas. He then attended the Kansas University, Lawrence, Kansas, and attended Midland College, Freemont, Nebraska.On December 5, 1951 Clarence joined the United States Marine Corps and honorably served in the Korean War, reaching the rank of Corporal.Clarence was united in marriage to Joan E. Chichester on April 8, 1968 in McPherson, Kansas. This union was blessed with the birth of two children, a son, and a daughter, David, and Christina. Clarence was a faithful member of the Trinity Lutheran Church of McPherson, Kansas. He was also a member of the Lutheran Brotherhood Fraternal Benefit Society, Boy Scouts of America, and the Quivira Council where he volunteered and was a part of for over 24 years. Clarence was self-employed as a carpenter and took great pride in his work. He also worked for Certain-Teed Corporation and Kit Manufacturing.Clarence was a Christian, loving and caring husband, father, grandfather, uncle, brother, and dear friend. His wise counsel and gracious smile will be missed by those who knew and loved him. Clarence was proud of his children and always wanted the best for them. He was especially fond of his grandchildren and looked forward to their visits and the times they shared. Clarence enjoyed watching TV, camping trips, fishing, and spending time with his children, and later his grandchildren. He was very good at working with his hands and shared his talent with others in many different ways.Clarence L. Wegele, 83, passed away at 9:49 a.m. on Monday, March 24, 2014 while in the company of family members at his home. He was preceded in death by his parents; and two brothers, John and Leslie Wegele.Surviving family members include his loving and devoted wife, of over 45 years, Joan E. Wegele of McPherson, Kansas; his children, Christina Koch and David Wegele both of McPherson, Kansas; his sisters, Esther Cromwell of Hoisington, Kansas, Elsie Hicks of Hoisington, Kansas; his brother, Wilmer Wegele and wife Cheryl of Great Bend, Kansas; four grandchildren, Courtney Pritchard and her husband John, Jeremy Johnson, Michaela Garnett, and Michael Beagle; ten great-grandchildren; many nieces and nephews, other relatives and a host of friends.Friends are invited to call on Wednesday, March 26, 2014 from 4 to 7 p.m. with family present from 5 to 7 p.m. at Glidden - Ediger Funeral Home, McPherson, Kansas. The funeral service will be held at 11:00 a.m. on Thursday, March 27, 2014 at the Trinity Lutheran Church, McPherson, Kansas with The Reverend Tim Leaf officiating. Special music “The Old Rugged Cross” and “Whispering Hope” will be sung by Robert Calhoun and accompanied by Rochelle Calhoun. The congregation will sing hymn # 697 “Just A Closer Walk With Thee” with Rochelle Calhoun accompanying. Military honors will be presented by members of the Veterans of Foreign Wars Post 2715 and American Legion Post 24, both of McPherson, Kansas.The final resting place will be at the Golden Belt Cemetery, Great Bend, Kansas at a later date.Memorial contributions may be given to Trinity Lutheran Church McPherson, KS or Boy Scout Troop 133 and they can be sent in care of the Glidden - Ediger Funeral Home; 222 West Euclid street, McPherson, Kansas 67460.USHERSJohn Johnson Rex Morris Dell Reese

Clarence L. Wegele, 83, of McPherson, Kansas, passed away at 9:49 a.m., Monday, March 24, 2014 while in the company of family members, at his home. Clarence L. Wegele, the son of Alexander and Marie (Zimmerman) Wegele, was born December 11,... View Obituary & Service Information

The family of Clarence L. Wegele created this Life Tributes page to make it easy to share your memories.

Send flowers to the Wegele family.