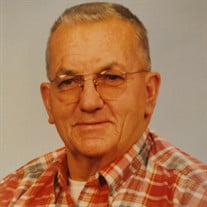 Clifford Earl Karraker, 88, passed away at 12:41 p.m., Tuesday, May 15th, 2018 while in the company of family members, at Cedars House. Clifford was born on his parents farm, Rural Climax, on June 10, 1929, a son of May Bessie (Higbee) and Earl Leroy Karraker. Clifford attended the Greenwood County Schools, Quincy, Kansas. He was a member of Hopefield Mennonite Church Moundridge, KS. Clifford honorably served in the U.S. Army as a PFC during the Korean War. Clifford was a rough neck in the oil fields for Pat Taylor and Blackstone Drilling, worked for San Ore Construction, owned his own dump truck and drove for Shears Construction as owner of Karraker Trucking, he also drove for Reimer Ford and Louie's Service Center where he was a custom fabricator and mechanic. Clifford enjoyed working puzzles, working with his hands, and doing small engine repairs. He was a very hard worker all his life and worked until he was 82. He also enjoyed tinkering on just about everything and anything. Clifford E. Karraker was united in marriage to Eulalia Loy Emerson on December 24, 1953 at the Church of Christ McPherson, Kansas. Eulalia died on July 15, 2012. He is survived by his children, Yvonne' Stanton and her husband Warren, of Anthony, Kansas, Lawrence Eugene Karraker and wife Juliet, of Woodstock, Georgia, Wallace Allen Karraker and wife Mary, of New Berlin, Wisconsin, Kevin Ray Karraker, of Galva, Kansas; sister-in-laws Zona Emerson, of McPherson, Kansas and Lynne Cyphers and husband David, of Newton, Kansas and Bonnie Cleland of Wagner, Oklahoma; 15 grandchildren, many great-grandchildren and great-great-grandchildren; several nieces and nephews, other relatives and host of friends. Clifford was preceded in death by his parents, his wife Eulalia, his sister, Delphia Williams, his brother, Marvin Karraker, a daughter-in-law, Lori Karraker, and grandson, Tyler Karraker Visitation with family will be held on Friday, May 25, 2018 from 6 to 8 p.m. at the Glidden - Ediger Chapel, McPherson. The memorial service will be held on Saturday, May 26, 2018 at 10:00 a.m. at Glidden - Ediger Chapel, McPherson, Kansas, with Pastor Galen Dreier and Reverend Warren Stanton officiating. Burial of cremains will be at the McPherson Cemetery McPherson, Kansas. Military Honors will be provided by American Legion Post 24 and Veterans of Foreign Wars Post 2715, both of McPherson. In lieu of flowers, memorial contributions may be made to the Cedars and they can be sent in care of the Glidden - Ediger Funeral Home; 222 West Euclid Street; McPherson, Kansas 67460.

The family of Clifford E. Karraker created this Life Tributes page to make it easy to share your memories.

Send flowers to the Karraker family.