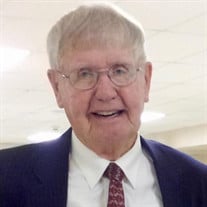 Clyde Hubert “Ole” Olson was born May 14, 1927 in Lindsborg, KS to Seth Theodore Olson and Elsie Oliva (Nelson) Olson. When he was 5-years old, the family moved to Fremont, KS where his father operated the county grain elevator and was caretaker of the Missouri Pacific Stockyard and Depot. He attended Freemount Grade School for 8 years, finishing in the spring of 1941. He attended and graduated from Marquette High School in 1945. He was drafted immediately into the U.S. Army and served in the United States for almost 2 years until he was honorably discharged. After being discharged on December 24, 1946, he returned home and did construction and farm work until the fall of 1947 when he enrolled at Kansas State University. He graduated in May 1951 with a B.S. degree in Business Administration. He remained a proud member of the Alumni Association and an avid K-State fan his entire life and passed this love onto his family. After graduating from K-State, he entered the management training program at Farmland Industries and spent several years working in Hillsboro, Leona and Lindsborg, KS. In October 1957, he began employment at NCRA (National Cooperative Refinery Association) in the Refined Product Distribution Division. In 1967 he moved into NCRA’s Refinery Accounting Division and remained in that department until 1978. He then served as LPG (Liquified Petroleum Gas) and Crude Oil Coordinator until his retirement in June 1989. In this role he was responsible for procurement and transportation of refinery feedstocks and became very well known in the crude oil and gas liquids industry. During his early years of employment at NCRA, he met Belen Rivas who worked as the Executive Secretary to the President and General Manager of the refinery. They were married July 29, 1961 at St. Joseph’s Catholic Church in McPherson, KS with the reception in the Blue Room at the Warren Hotel. After a honeymoon to Mexico City and Acapulco, they moved into a small house in McPherson at 315 West Seitz. To this union, 2 children – Richard Eugene (August 11, 1962) and Esther Maria (September 15, 1965) were born. In 1965, the family moved to North High Drive which would be their home for the next 53 years. Clyde and his wife, Belen, shared a love for helping people. They opened their home on multiple occasions to students from Mexico who came to study in the United States. These students – Marcela Stickley, Begoña Serrador and Javier Najera, became like members of the family. This was a rewarding experience for them which enriched their lives for years to come. Clyde truly enjoyed learning about the Mexican people and their culture. Likewise, Clyde was proud of his Swedish heritage and instilled holiday traditions that became so meaningful to his family. No one enjoyed lutfisk more than Ole! During retirement, he kept busy playing golf, serving as treasurer of Freemount Lutheran Church and served several terms on church council. He also served Meals on Wheels in McPherson as a driver, Treasurer for 8 years and as Board Chairman for 2 years. He was always available to help those needing assistance and many benefited from his caring heart and generous nature. Clyde and Belen travelled extensively including a trip to Sweden in 1981 and many trips to Mexico, and other destinations such as Hawaii, Canada and many of the U.S. National Parks. They were both blessed with good health and abundant energy. Clyde Olson, 93 of McPherson, passed away at 11:59 p.m., on Saturday, October 17, 2020 at Salina Regional Medical Center, Salina, KS. He was preceded in death by his father Seth in 1960, his mother Elsie in 1977, and his sister, Maybelle Rae who died in 1932. Clyde is survived by his wife, Belen and his son Richard Olson (wife Debbie) of McPherson, KS and Branson, MO; and his daughter, Esther Maria McGowan (husband Kenny) of Roeland Park, KS. He is also survived by the following whom he loved like his own children: Alma Moore and her daughters Lindsey and Ashley; Arisbeth McCook (husband Charlie) and their children Isabella and Sawyer; Marcela Stickley (husband Duane) and their son Michael. He became known as “Grandpa” to them. Due to Covid-19 risk, a private family service will be held at the Freemount Lutheran Church (located at 2511 8th Avenue in rural Marquette, KS) on Friday, October 30, 2020 at 10:00 a.m. with Pastor Phillip Hett officiating. Military honors will be presented by members of the Veterans of Foreign Wars Post 2715 and American Legion Post 24. Burial will be in the McPherson Cemetery at a later date. Memorials may be given in memory of Clyde to St. Labre Indian School or Freemount Lutheran Church in care of Glidden - Ediger Funeral Home at 222 W. Euclid in McPherson, KS 67460.

Clyde Hubert &#8220;Ole&#8221; Olson was born May 14, 1927 in Lindsborg, KS to Seth Theodore Olson and Elsie Oliva (Nelson) Olson. When he was 5-years old, the family moved to Fremont, KS where his father operated the county grain elevator... View Obituary & Service Information

The family of Clyde H. Olson created this Life Tributes page to make it easy to share your memories.

Send flowers to the Olson family.