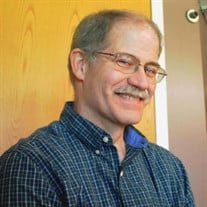 Curtis Keith Crough, 63, of McPherson, Kansas, passed away at 10:04 a.m., surrounded by family, on Friday, April 2nd, 2021 at The University of Kansas Health System, Kansas City, Kansas. Curtis was born in Salina, Kansas on May 9, 1957, a son of Maxine (Moses) and Curtis V. Crough. Curtis attended the Salina grade schools and graduated from Salina Central High School, Salina, Kansas in 1975. Curtis Keith Crough was united in marriage to Lisa Jo Kaiser on October 15, 1983 at McPherson, Kansas. The young couple established their first home together in McPherson. This union was blessed with the birth of two children, Lacey and Allison. Curtis worked for Dillon's for 42 years retiring as Produce Manager in 2017. He started as a volunteer with the McPherson Gymnastics Club in 2000 and soon took on the role of a Coach. He later became the Director of Gymnastics through the McPherson YMCA. Curtis loved baseball, baseball, baseball! He enjoyed old movies, listening to music, reading, listening to Rush Limbaugh with out fail every weekday, working crossword puzzles, coaching baseball and gymnastics, going to the drag races to watch his son-in-law, and attending his children's and grandchildren's activities and spending time with his family. He is survived by his loving and devoted wife of over 37 years, Lisa Crough, of McPherson, Kansas; his daughters, Lacey Meier and husband Adam, of Kansas City, Missouri and Allison Curran and husband Ryan, of McPherson, Kansas; his sister Terri Johnson and husband Gary, of Bennington, Kansas; his mother Maxine Jellison, of Solomon, Kansas; his father Curtis V. Crough and wife Ruth, of Rockport, Texas; his four grandchildren, Owen Curran, Liam Curran, Cecelia Meier, and Penelope Meier; other relatives and a host of friends. The visitation will be held on Wednesday, April 7, 2021 from 6 p.m. to 8 p.m. at Glidden - Ediger Chapel, McPherson, Kansas. The funeral service will be held at the Free Methodist Church, McPherson, Kansas, at 11:00 a.m. on Thursday, April 8th, 2021 with Pastor Jackie Case officiating. In lieu of flowers, memorial contributions may be made to Curtis Crough Memorial Fund (to be designated at a later date) and they can be sent in care of the Glidden - Ediger Funeral Home; 222 West Euclid Street; McPherson, Kansas 67460.

Curtis Keith Crough, 63, of McPherson, Kansas, passed away at 10:04 a.m., surrounded by family, on Friday, April 2nd, 2021 at The University of Kansas Health System, Kansas City, Kansas. Curtis was born in Salina, Kansas on May 9, 1957, a... View Obituary & Service Information

The family of Curtis K. Crough created this Life Tributes page to make it easy to share your memories.

Curtis Keith Crough, 63, of McPherson, Kansas, passed away at...

Send flowers to the Crough family.