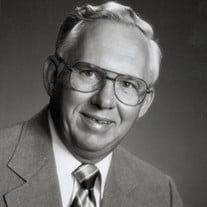 D. Gene Hill, 86, of McPherson, Kansas, passed away at 8:30 p.m., Wednesday, September 2nd, 2020 while in the company of family members, at his farm rural McPherson. Gene was born at his parents home in Mount Hope, Kansas on December 10, 1933, a son of Callie (Adam) and Glen Benjamin Hill. Gene attended Mount Hope Grade School, and graduated from Mount Hope High School, Mount, Hope, Kansas in 1951. He then attended Kansas State University, Manhattan, Kansas, until he was drafted into the United States Army where he honorably served his Country during the Korean War. After his discharge he enrolled at Hutchinson Community College, Hutchinson, Kansas where he also played football and transferred to Pittsburg State University, Pittsburg, Kansas where continued playing football and graduated. He later received his Masters degree from California State University, Long Beach, California. Gene Hill was united in marriage to Phyllis O'Neal on November 22, 1958 at First United Methodist Church, Hutchinson, Kansas. The young couple established their first home together in Allen, Kansas. This union was blessed with the birth of two children, one son and one daughter, Andy and Gwen. The family moved to Great Bend, Kansas for 3 years prior to moving to Santa Ana, California until 1968 when they moved to the McPherson area. He was a member of First United Methodist Church McPherson, Kansas where he was a member of the Methodist Men and served on the Church Board for 10 years. Gene was a farmer and was a Industrial Arts and Science school teacher and started teaching at the first consolidated school in Kansas located at Allen, Kansas, taught at Great Bend Middle School and coached football and track, taught at Santa Anna McFadden High School and Willard Middle School in Santa Anna, California; and taught at McPherson College, McPherson, Kansas. After his retirement he was a substitute teacher at several schools. He also ran for Kansas State Legislator in 1982/1983. Gene also managed a wheat farm in Tabuk, Saudi Arabia for several years. Gene was a member of the American Legion Post 24, Lions Club International McPherson, Mount Hope Masonic Lodge, Mount Hope, Kansas, and the Hutchinson Antique Tractor Club, Hutchinson, Kansas. He loved his family, farming, his old cars and antique tractors. He also enjoyed traveling, reading, teaching, was great at working with his hands and made many pieces of furniture and other woodworking pieces for his family. He is survived by his loving and devoted wife of over 61 years, Phyllis Hill, of McPherson, Kansas; his children, Andy Hill and wife Kathy, of McPherson, Kansas and Gwen Hill-Czirjak and husband James, of Nashville, Tennessee; his favorite grandson, Austin Benjamin Czirjak; other relatives and a host of students and friends. Gene was preceded in death by his parents; and two brothers, an infant, Garland and Bobby Wayne Hill. Visitation will be held on Tuesday September 8, 2020 from 5 to 7 p.m. at Glidden - Ediger Chapel, McPherson. The funeral service will be held at Glidden - Ediger Chapel, McPherson, at 11:00 a.m. on Wednesday, September 9th, 2020 with Pastor Emily Cannon and Pastor Phillip Clay officiating. Final resting place will be at the Hill Family Farm McPherson, Kansas. Military honors will be presented by members of the American Legion Post 24 and Veterans of Foreign Wars Post 2715 both of McPherson. In lieu of flowers, memorial contributions may be made to Antique Tractor Club of Hutchinson or the American Legion Post 24, McPherson and they are to be sent in care of the Glidden - Ediger Funeral Home; 222 West Euclid, McPherson, Kansas 67460

D. Gene Hill, 86, of McPherson, Kansas, passed away at 8:30 p.m., Wednesday, September 2nd, 2020 while in the company of family members, at his farm rural McPherson. Gene was born at his parents home in Mount Hope, Kansas on December 10, 1933,... View Obituary & Service Information

The family of D. Gene Hill created this Life Tributes page to make it easy to share your memories.

Send flowers to the Hill family.