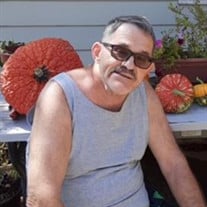 Dale Eugene "Gene" Bengtson, 66, of Inman, Kansas, died at 6:42 a.m., Friday, January 15th, 2021 at home and went to be with his Lord and Savior after a long battle with cancer. Gene was born in Hays, Kansas on May 16, 1954, a son of Dale L. and Elsie Yvonne (Jones) Bengtson. Gene attended Oakdale grade school, Salina, Bavaria Junior High, Bavaria, Kansas and graduated from Brookville High School, Brookville, Kansas in 1972. He enjoyed playing basketball and football as well as being on the student council, class play, yearbook, served as advertising manager, and Letterman's Club. He then attended Kansas Wesleyan University, Salina, Kansas on a football scholarship and was all league quarterback. He was a member of Central Baptist Church, Salina, Kansas. Through the years Gene worked for his father at Bengtson Tire and Service, Salina, Kansas until he opened his own shop Frontier Tire in which he retired from. Gene enjoyed fishing, raising gourds, pumpkins, and house plants. Judge Judy had a special place in his heart. He also enjoyed the Royals and Chiefs winning championships, traveling with his wife and spending time with his family. Dale Gene Bengtson was united in marriage to Gwendoline Rose Barnhart Walker on September 19, 2015 in Salina in the Pastors back yard. He is survived by his loving wife, Gwen Bengtson, of Inman, Kansas; his sons, Matthew Bengtson, of Omaha, Nebraska and James Bengtson and wife Trish, of Basehor, Kansas; his brothers, Earl Bengtson and wife Anna, of Salina, Kansas and Roger Bengtson and wife Sherry, of Gypsum, Kansas; his nieces and nephews, Jesse Bengtson, Gaby Bengtson, Laurie Pelham and husband Andrew, and Justin Bengtson and wife Elizabeth; his aunt, Isabel Bengtson; his step-daughters, Elisa Applebee and Tiffany Hinson and husband Bob; his mother-in-law, Theresa Barnhart; his three grandchildren, Alexis Bengtson, Logan Bengtson, and Abigail Bengtson; and three step-grandchildren, Christopher Stiles, Sebastian Applebee, and Serena Hinson; and other relatives. Gene was preceded in death by his parents, Dale and Yvonne Bengtson; and twin brothers, Ron and Don Bengtson. Private family memorial service will be held at Central Baptist Church, Salina at 11:00 a.m. on Monday, January 18th, 2021 with Reverend Chad Farber officiating. The service will be live streamed on CBCSALINA.ORG Burial will be at the Elmwood Cemetery Lindsborg, Kansas at a later date. In lieu of flowers, memorial contributions may be made to Central Baptist Church, Salina, Kansas or American Cancer Society and they can be sent in care of the Glidden - Ediger Funeral Home; 222 West Euclid; McPherson, Kansas 67460.

The family of Dale Gene Bengtson created this Life Tributes page to make it easy to share your memories.

Send flowers to the Bengtson family.