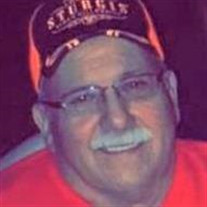 Dale Martin "Sparky" Gosselin, 71, of Newton, Kansas, passed away at 5:00 p.m., Friday, April 7th, unexpectedly, at his home. Sparky was born in Concordia, Kansas on June 11, 1945, a son of Zella Leda (Comeau) and Almer Martin Gosselin. Sparky attended Washington grade school, Concordia middle school and graduated from Concordia Junior - Senior High school, Concordia, Kansas. He was a member of Our Lady of Perpetual Help Catholic Church in Concordia, Kansas. Sparky was a farmer, and was a co-owner along with his wife Doris, of a Restaurant in Custer, South Dakota, was a prep cook for a Baker's Bakery and the Purple Pie Place. He then moved to Newton, Kansas and worked for New Beginnings in McPherson as a direct care staff, from which he retired from. Sparky was a member of A.A., no matter where he lived and they where considered part of his family. He enjoyed meeting new people, ice cream, breakfast dates, snow mobiling, cooking and barbecuing, the years he lived in South Dakota being so close to the Black Hills, and spending time with his family. Sparky always looked forward to the summers when the girls from other countries would came to work in Custer. He formed lasting friendships in which he cherished greatly and continued to stay in touch with them. Sparky was united in marriage to Marlene Strait. This union was blessed with the birth of three children, one son and two daughters, Rodney, Renee and Tiffany. Sparky was united in marriage to Doris Tweden. This union was blessed with the birth of two children, a son and a daughter, Albert and Melissa. Sparky was blessed with a daughter from a previous relationship, Brianna. Sparky is survived by his children, Rodney Gosselin and his wife Tambre, of McPherson, Kansas, Renee Kelly, of McPherson, Kansas, Brianna Mahaffy, of Rapid City, South Dakota, Melissa Rush and her husband Anthony, of Custer, South Dakota, and Albert Gosselin and his significant other Taylor, of Rapid City, South Dakota; his siblings, Lawrence Gosselin, of Oxford, Kansas, Theresa Hoffhines and her husband Michael, of Salina, Kansas, Gary Gosselin and his wife Cindy, of Salina, Kansas, Betty Hahn and her husband Tom, of Novato, California, and the twins, Ronald Gosselin, of Concordia, Kansas and Donald Gosselin of Beloit, Kansas; his 7 + grandchildren, Brandon, Nicholas, Cheyenne, Jonathon, Sarah, Karlie, Bryce and one on the way!!: his 2 great-grandchildren, Jinisin and Aiden; many nieces and nephews, other relatives and a host of friends. Sparky was preceded in death by his parents, Zella and Almer Gosselin; his daughter, Tiffany Thomas; and an infant sister, Patricia Gosselin. Visitation will be held on Wednesday from 4 to 8 p.m. with family present from 6 to 8 p.m. at Glidden - Ediger Chapel, McPherson, Kansas. The funeral service will be held at Glidden - Ediger Chapel, McPherson, Kansas, at 10:30 a.m. on Thursday, April 13th, 2017 with Pastor H. Dick Reynolds Jr. officiating. Graveside service will be held on Thursday, at 3:00 p.m. at the St. Concordia Cemetery, Concordia, Kansas. In lieu of flowers, memorial contributions may be made to Memorials in memory of Sparky are suggested to New Beginnings of McPherson or A.A. of Newton, Kansas and they can be sent in care of the Glidden - Ediger Funeral Home; 222 West Euclid; McPherson, Kansas 67460.

The family of Dale Martin "Sparky" Gosselin created this Life Tributes page to make it easy to share your memories.

Send flowers to the Gosselin family.