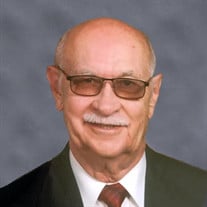 Dale Emory Nelson, was born on August 2, 1939, in Salina, Kansas, to Elmer A. and Veda V. (Magnuson) Nelson. He died on January 16, 2020 at KU Medical Center, Kansas City, Kansas at the age of 80 years. He had one older brother, Dee W. Nelson who passed away on June 9, 1993. Dale grew up on a farm near Bridgeport, Kansas and went to Bridgeport grade school for four years, Assaria grade school for four years and graduated from Assaria High School in 1957. He was baptized and confirmed at Assaria Lutheran Church. While growing up Dale loved farming and playing baseball and basketball. Dale joined the United States Army Reserve after high school. He served 6 months active duty and 3 and a half years in the active reserve and several years in the inactive reserves, receiving an Honorable discharge in 1965. When his active Army duty was completed, he enrolled in Bethany College, Lindsborg, Kansas and received a BA degree in 1962. After graduation Dale taught high school business and American History at Trego Community High School in WaKeeney, Kansas. While at Bethany he met his wife Glee Elaine Morrison and they were married July 20, 1963 at Immanuel Lutheran Church in Bertrand, Nebraska. The young couple established their first home together in WaKeeney, Kansas. Born to this marriage was two sons, Eric Andrew Nelson was born January 16, 1970 and Mark Frederick Nelson on September 27, 1973. He also received a MS degree in Business from Fort Hays State University in 1965. He then was an instructor of Economics and Business at North Platte Junior College(now named Mid-Plains Community College) for eight years. The Nelson family moved to Columbus, Nebraska in 1973. The family lived there 29 years and Dale worked at Equitable Savings and Loan, Nebraska Public Power and Reed, Veach & Wurderman Engineering. He also did some work for Nebraska Land Title and Abstract Company in Omaha, Nebraska. After Dale and Glee retired they moved to McPherson, Kansas in 2002. Dale served on church council at 3 different Lutheran churches, sang in several choirs and was a docent at the McPherson Opera House. He sang in the Bethany Oratorio Society, Lindsborg, Kansas for 10 tears. All his life he enjoyed sports (especially KU Basketball, Kansas City Royals, St. Louis Cardinals and McPherson Bullpups) , music, traveling, his church and spending time with his family. He is survived by his loving and devoted wife of 56 years Glee Nelson, of McPherson, Kansas; his sons Eric A. Nelson, of Strongsville, Ohio and Mark F. Nelson, of Olathe, Kansas; his brother-in-law & sister-in-law, William and Elizabeth Hinze, of Santa Claita, California, his brother-in-law, James Cooley, of Oxford, Nebraska; his nephews, Jeffrey & Matt Hinze and their family, of Santa Clarita, California, Christopher Cooley and family, of Waverly, Nebraska and Robert Cooley and family, of Kearney, Nebraska; other relatives and a host of friends. He was preceded in death by his parents; his brother Dee W. Nelson; his sister-in-laws Marg Nelson and Maria Cooley. Visitation will be held on Wednesday, January 22, 2020 at Trinity Lutheran Church from 5:00 p.m.- 7:00 p.m. A funeral service will be held on Thursday, January 23, 2020 at 10:30 a.m. at Trinity Lutheran Church, with Pastor Tim Leaf officiating. Burial will be held at the Salemsborg Lutheran Cemetery in Smolan, Kansas Memorial contributions may be made to Trinity Lutheran Church Organ Fund, Bethany College or Birger Sandzen Memorial Gallery and can be sent to Glidden-Ediger Funeral Home; 222 W. Euclid; McPherson, Ks. 67460.

Dale Emory Nelson, was born on August 2, 1939, in Salina, Kansas, to Elmer A. and Veda V. (Magnuson) Nelson. He died on January 16, 2020 at KU Medical Center, Kansas City, Kansas at the age of 80 years. He had one older brother, Dee W. Nelson... View Obituary & Service Information

The family of Dale Emory Nelson created this Life Tributes page to make it easy to share your memories.