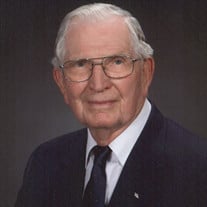 Dale Dean Powell, 92, of McPherson, Kansas, passed away at 6:06 a.m., Friday, February 8th, 2019 while in the company of family members, at Cedars House. Dale was born on in Lawrence, Kansas on February 27, 1926, a son of Lola Safronie (Eaton) and Bradford Hays Powell, Sr. Dale attended the Lone Star grade school, Lone Star, Kansas and graduated from Lawrence High School, Lawrence, Kansas in 1943. He was a member of First United Methodist Church McPherson, KS. Through the years Dale worked on a dairy farm with his brothers near Lone Star, Kansas; worked for Consumers Cooperative Association which later became Farmland Ind. in Colby as a Field Representative and later in McPherson, Kansas as a Petroleum Merchandiser; worked for Bill Duguid and Duguid Real Estate and later went out on his own and established Dale Powell Real Estate. Through the years Dale acquired several rental properties throughout McPherson as well as the You Store It mini storage. Dale was a member of numerous organizations through the years and served as President of the Kansas Liquified Petroleum Association, McPherson Board of Realtors and served as President, McPherson Area Council of Alcohol and Drug Services, McPherson Shrine Club; IsIs Temple, was a Camel Herder, and Topless Car Club member, A.A. of McPherson, and served on the board of the Kansas State Real Estate Association; Dale enjoyed KU Basketball, his AA Family, Helping others in need, he never met a stranger and could talk to just about anybody, collecting automobiles and working on cars, owned a McCormick Cadet Club Tractor in which he restored and would drive in the McPherson All Schools Day Parade, golfing trips with his friends and family and spending time with his family especially his grand kids. He was very proud of McPherson and the relationships he developed with the community members. Dale Dean Powell was united in marriage to Barbara Elizabeth Benedict on February 8, 1948 at his mother-in-laws house in Lawrence, Kansas. The couple established their first home together in Lone Star, Kansas. This couple was blessed with the birth of 2 sons, Mark and Barry. The family moved to Colby, Kansas prior to making their home in McPherson. He is survived by his loving and devoted wife of seventy-one years, Barbara Powell, of McPherson, Kansas; his sons, Mark Powell and wife Connie, of McPherson, Kansas and Barry Powell and wife Debbie, of McPherson; his sisters, Shirley Herrell, of Clinton, Kansas and Nell Trefz, of Eudora, Kansas; his four grandchildren, Melanie Luttig (Mitch), Ryan Powell (Christy), Shannon Powell, (Lanae), Brandon Powell; his 10 great-grandchildren, Brittany, Avery, Gianna, Tatum, Gavin, Drew, Whitney, Adrie, Kalei, and Matthew; several nieces and nephews, other relatives and a host of friends. Dale was preceded in death by his parents; his brothers, Bradford, Jr. and Wayne Powell. Visitation will be held on Thursday, February 14, 2019 from 5 p.m. to 7 p.m. at Glidden - Ediger Chapel, McPherson. Private family graveside service will be held at the McPherson Cemetery, McPherson, KS.with Chaplin officiating. In lieu of flowers, memorial contributions may be made to McPherson AA or the McPherson Shriner's Children Travel Fund and they can be sent in care of the Glidden - Ediger Funeral Home; 222 West Euclid Street; McPherson, Kansas 67460.

Dale Dean Powell, 92, of McPherson, Kansas, passed away at 6:06 a.m., Friday, February 8th, 2019 while in the company of family members, at Cedars House. Dale was born on in Lawrence, Kansas on February 27, 1926, a son of Lola Safronie (Eaton)... View Obituary & Service Information

The family of Dale Dean Powell created this Life Tributes page to make it easy to share your memories.

Send flowers to the Powell family.