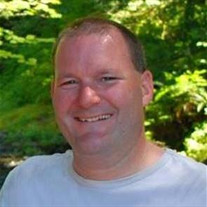 Daniel Thayne "Dan" Nilson, 44, of Canton, KS, passed away at 2:32 p.m., Saturday, March 23rd, 2019 from injuries received in a tractor accident, at his home, rural Canton. Daniel was born in Salina, Kansas on October 6, 1974, a son of Mary Anna (Machetta) and Arthur "Art" Emanuel Nilson. Daniel attended the Southeast of Saline Grade School, Faith Christian School of Salina, and graduated from Southeast of Saline High School, Gypsum, Kansas. He then attended Central Christian College, McPherson, Kansas and graduated from Vatterott College, Wichita, Kansas with his HVAC Degree. He was a member of Temple Church Gypsum, Ks. Through the years, Dan worked for O'Dell Laundry, Pyle Construction Company both of McPherson, Wiens and Dudley Construction Company, of Hutchinson, Kansas, Pestingers Heating and Air in Salina, Kansas as an installer, and was currently working for Goering Hardware in Moundridge, Kansas as an installer. Dan enjoyed life, was very ornery and fun loving, he liked making things, taking things apart to see how they work, helping others, and spending time with his family. Daniel Thayne Nilson was united in marriage to Renee Lynn Healey on July 4, 1995 at Temple Church, Gypsum, Kansas. The young couple established their first home together in McPherson. This union was blessed with two children, a daughter and a son, Katherine and Connor. The family moved quite a bit before moving to rural Canton where they are currently living.. He is survived by his loving and devoted wife of over 23 years, Renee Nilson, of Canton, Kansas; his children, Katherine Nilson and Connor Nilson, both of Canton, Kansas; his parents, Art and Mary Anna Nilson, of Gypsum, Kansas; his in-laws, Norman and Janice Healey of McPherson, Kansas; his siblings, David Nilson of Gypsum, Kansas and Tasha Trout of Salina, Kansas; his honorary daughters, Rikkie Estus, and Kristin Estus, of McPherson, Kansas; his honorary grandson, Ryder Estus, of McPherson, Kansas; several nieces and nephews, other relatives and a host of friends. Dan was preceded in death by his grandparents. Friends are invited to call on Friday, March 29, 2019 from 5 p.m. to 8 p.m. at Glidden - Ediger Chapel, McPherson, Kansas. Funeral service will be held at Free Methodist Church, McPherson, KS, at 2:00 p.m. on Saturday, March 30th, 2019 with Pastor Dennis Mullins officiating. Graveside service will be held at 4:30 p.m., on Saturday, March 30, 2019 at Temple Church Cemetery, rural Gypsum, Ks. In lieu of flowers, memorial contributions may be made to Daniel Nilson's Children's Educational Fund and they can be sent in care of the Glidden - Ediger Funeral Home; 222 West Euclid Street; McPherson, Kansas 67460.

The family of Daniel Thayne Nilson created this Life Tributes page to make it easy to share your memories.

Send flowers to the Nilson family.