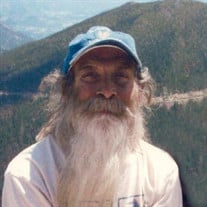 Danny Daryl Dickinson, 65, of McPherson, Kansas, passed away at 7:24 a.m., Monday, January 17th, 2022, at his residence. Danny was born in Sidney, Nebraska on November 14, 1956, a son of Clarabelle Lavina (Sanders) and Billy William Dickinson. Danny attended Sunol grade school, Sunol, Nebraska and graduated from Lodgepole High School, Lodgepole, Nebraska in 1975. After high school, Danny entered the United States Army National Guard where he served until his honorable discharge in December 1980. Through the years Danny worked as a welder on the Union Pacific Railroad for 9 years, a seismic surveyor for several years, and surveyed for an Archeologist. He also worked on several construction jobs as a welder and retired from Moridge Mfg., Moundridge, Kansas as a machine operator in 2020. Danny was a member of the American Legion Post 24 in McPherson. Danny enjoyed being outdoors and loved his dogs, motorcycles, traveling, hunting and spending time with his friends and family. Danny Dickinson was united in marriage to Kristi Ketterman on Feb. 14, 1985, in McPherson. He is survived by his loving and devoted wife Kristi Ketterman, of McPherson, Kansas, his siblings, Dale Dickinson and his wife Bonita, of Sidney, Nebraska, Kenneth Dickinson and his wife Susan, of Sidney, Nebraska and Gene Dickinson and his wife Judy, of Sidney, Nebraska. He is also survived by his nine nieces, nephews and numerous cousins and friends. Danny was preceded in death by his parents, his sons, Joseph and Eric and his brothers, Leroy, Jimmy and George. A graveside service will be held on Saturday, March 19, 2022, at 10:30 a.m. at the McPherson Cemetery, McPherson, Kansas with Pastor Lynn Scott officiating. Military honors will be provided by the American Legion Post 24 and the Veterans of Foreign Wars Post 2715 w/ Mark Casebeer playing taps. Lunch will be served at the First Christian Church following the graveside for all in attendance. Memorials are suggested to the Kansas Honor Flights or McPherson County Humane Society, and they can be sent to Glidden-Ediger Funeral Home, 222 W. Euclid St., McPherson, Ks. 67460.

The family of Danny Daryl Dickinson created this Life Tributes page to make it easy to share your memories.

Send flowers to the Dickinson family.