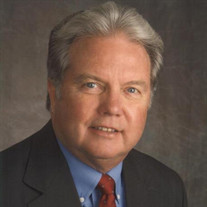 Dean Elliott, the only son of Robert Arnold and Marie A. (Colwell) Elliott, was born on January 18, 1944 in McPherson, Kansas. Dean would never know his true father for he died while he was serving in the military during W.W.II. in November of 1943 just a couple months before Dean’s birth. His mother, Marie later was united in marriage to Paul Barker, the only dad Dean ever knew. He always thought he was lucky to have three sets of grandparents because other kids only had two. They all made him feel special when he was a little kid. Dean attended Washington grade school and graduated from McPherson High School, McPherson, Kansas in 1962. He then attended and graduated from McPherson College and had several jobs which all prepared him for his final job, selling Insurance and Real Estate. On April 2, 1966, Dean was united in marriage to his high school sweetheart, Donna Sue Kaufman in McPherson at the First Mennonite Church. The young couple established their first home together in McPherson and this union was blessed with the birth of three children, one daughter and two sons, Jamie was born in 1969, followed by Christopher in 1973 and Andrew in 1977. Dean worked as a Insurance Agent and later became a Realtor for Century 21 Landmark, Co. owned by Wayne Holecek. Dean said one of the luckiest things that happened was to buy the Insurance and Real Estate Agency from some people that treated him like their own son. Dean later changed the name to Elliott Insurance and Real Estate. He was so proud of the fact that his sons followed in his footsteps and they were able to work side by side with them and they continue to serve McPherson the way he did. During those 34 years, he met some really nice people and made some good friends. Dean was a lifetime member of the First United Methodist Church in McPherson. He served on many different committees at the church and tried to take all the Bible studies that were offered. He also faithfully served on the Opera House board and served as President, Hospital board, was a Lions Club member serving as Treasurer and President, and served on the McPherson College Board of Trustees. He received the Citation of Merit Award from McPherson College and he said he never could figure out why he got that award but he was proud of it. Dean was a Christian, loving and devoted husband, father, grandfather, brother, uncle and dear friend to many. His wise counsel, gentle but firm guidance, and gracious smile will be missed by those who knew and loved him. He was very proud of his children and always wanted the best for them. He was especially fond of his grandchildren and always looked forward to their visits and times they would share together. Dean enjoyed hunting, fishing, golfing, motorcycle riding, and going on many trips. Dean Elliott, 77, of McPherson, Kansas passed away at 5:00 a.m., Wednesday, June 30th, 2021 surrounded by the love of his life and his family at his home. He was preceded in death by his grandparents; and parents, Robert, Marie, and Paul. Surviving family members include his loving and devoted wife of over 55 years, Donna Elliott, of the home; his children, Jamie Elliott (Jake) of McPherson, Chris Elliott (Tammy) of McPherson, and Andy Elliott (Sarah) of McPherson; his eight grandchildren, Dylan, Jordan (Adrain), Emily, Caylee, Clayton, Kenna, Adam, and Reese; his sister, Paula Larson of McPherson; other relatives and a host of friends. The memorial service will be held on Tuesday, July 6, 2021 at 11:00 a.m. at the First United Methodist Church, McPherson with Pastors Emily Cannon and Terry Post officiating. To watch livestream go to: mcphersonfumc.com and select Facebook or YouTube. Burial was at the McPherson Cemetery, McPherson, Kansas. In lieu of flowers, memorials in memory of Dean are suggested to the First United Methodist Church, Wheatland Baptist Church, McPherson Hospital, or McPherson Opera House and they can be sent in care of the Glidden - Ediger Funeral Home; 222 West Euclid Street; McPherson, Kansas 67460.

Dean Elliott, the only son of Robert Arnold and Marie A. (Colwell) Elliott, was born on January 18, 1944 in McPherson, Kansas. Dean would never know his true father for he died while he was serving in the military during W.W.II. in November... View Obituary & Service Information

The family of Dean Elliott created this Life Tributes page to make it easy to share your memories.

Dean Elliott, the only son of Robert Arnold and Marie A. (Colwell)...

Send flowers to the Elliott family.