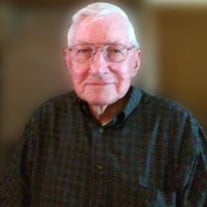 Dennis Dee Gordley, 85, of McPherson, Kansas, passed away at 5:53. p.m., Thursday, March 18th, while in the company of family members, at Pleasant View Home, Inman, Kansas. Dennis was born in Kinsley, Kansas on July 8, 1935, a son of Matilda (Tuckenhagen) and Elbert Gordley. Dennis attended the Kinsley elementary school and graduated from Kinsley High School, Kinsley, Kansas. He also attended and later became a member of the Kinsley Lutheran Church. He honorably served in the U.S. Army as a SGT (T) during peace time after the Korean War He received the MKM (rifle), Prchst Badge; SS (Rifle 2); Expert (LMG); and Good Conduct Medal. Through the years Dennis worked in the oil service industry for Halliburton Industries for 30 years and then for ExCalibur Production Company from which he retired after 20 years. Dennis enjoyed the out-of-doors especially fishing, hunting, trapping, camping, and boating. He also liked playing cards and board games, gambling and going to Casinos, dancing, traveling the US and overseas, going to children's and grandchildren's sporting events, and spending time with his family. Dennis Dee Gordley was united in marriage to Shirlene Marie Mendlik on September 3, 1960 at St. Rose Catholic Church Great Bend, Kansas. The young couple established their first home together in Great Bend, Kansas. This union was blessed with the birth of three children two sons and a daughter, Kevin, Kent, and Paula. In 1972 the family moved to Ness City, Kansas and in 1974 moved to McPherson. He is survived by his loving and devoted wife of over 60 years, Shirlene Gordley, of McPherson, Kansas; his children, Kent Gordley and wife Cecilia, of Emporia, Kansas and Paula Moss and her husband Craig, of Olathe, Kansas; his sister, Betty Werner, of Kansas City, Kansas; his 2 favorite grandchildren, Benjamin Moss and wife Claire and Alexandra Moss. Dennis was preceded in death by his parents, Elbert and Matilda Gordley; a son Kevin Gordley; a brother Bob Gordley. Graveside service will be held at 1:30 p.m., on Thursday March 25, 2021 at the McPherson Cemetery, McPherson, Kansas, with Chaplin Jeff Owen officiating. Military honors will be presented by members of the Veterans of Foreign Wars Post 2715 and American Legion Post 24 both of McPherson. In lieu of flowers, memorial contributions may be made to Kindred Hospice and they can be sent in care of the Glidden - Ediger Funeral Home; 222 West Euclid Street; McPherson, Kansas 67460.

Dennis Dee Gordley, 85, of McPherson, Kansas, passed away at 5:53. p.m., Thursday, March 18th, while in the company of family members, at Pleasant View Home, Inman, Kansas. Dennis was born in Kinsley, Kansas on July 8, 1935, a son of Matilda... View Obituary & Service Information

The family of Dennis D. Gordley created this Life Tributes page to make it easy to share your memories.

Dennis Dee Gordley, 85, of McPherson, Kansas, passed away at...

Send flowers to the Gordley family.