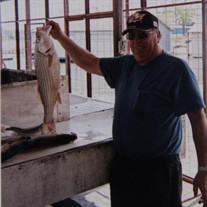 Milton Dennis "Toby" Parsons, 70, of Mcpherson, Kansas, passed away at 4:28 a.m., Thursday, January 18th, 2018 while in the company of family members, at Angel Arms. Toby was born in Talmage, Kansas on December 23, 1947, a son of Margaret Louise (Ginavan) and William Henry Parsons. Toby attended McPherson grade school and McPherson High School, McPherson, Kansas. He honorably served in the U.S. Army. Through the years Toby worked for McPherson Concrete as a Silo Builder, Certainteed Cooperation in the maintenance department and started at Johns Manville in the maintenance department and worked from 1974 until he retired in 2014. Toby was a member of the Veterans of Foreign Wars Post 2715. Toby enjoyed crop touring, fishing, spending time with family especially his grandkids and being with his friends. Toby Parsons was united in marriage to Carolyn Sue Johnson on January 14, 1966 at McPherson, Kansas. He is survived by his children Todd Parsons and wife Shannan, of McPherson, Kansas and Clover Parsons, of McPherson, Kansas; his siblings Roy Parsons and wife Connie, of Waynesville, North Carolina, Joe Parsons, of Moscow, Texas and Patty Hindman and husband John, of Hutchinson, Kansas; his grandchildren, Cody Parsons, Cloe Parsons, Caylee Elliott and Clayton Elliott. Toby was preceded in death by his parents and Carolyn Parsons. Visitation will be held from 6:00 p.m. to 8:00 p.m. on Thursday, January 25, 2018 at the Glidden-Ediger Chapel, McPherson, Kansas. The Funeral service will be held on Friday, January 26, 2018 at 2:30 p.m. at the First United Methodist Church, McPherson, Kansas, with Reverend Darren Frazier officiating. Burial will be held at the McPherson Cemetery McPherson, Kansas. Military Honors will be provided by The Veteran's of Foreign Wars Post 2715 and the American Legion Post 24 of McPherson, Kansas. In lieu of flowers, memorial contributions may be made to the Veteran's of Foreign Wars Post 2715 and they can be sent to Glidden-Ediger Funeral Home; 222 West Euclid Street; McPherson, Kansas 67460.

Milton Dennis "Toby" Parsons, 70, of Mcpherson, Kansas, passed away at 4:28 a.m., Thursday, January 18th, 2018 while in the company of family members, at Angel Arms. Toby was born in Talmage, Kansas on December 23, 1947, a son of Margaret... View Obituary & Service Information

The family of Dennis "Toby" Parsons created this Life Tributes page to make it easy to share your memories.

Send flowers to the Parsons family.