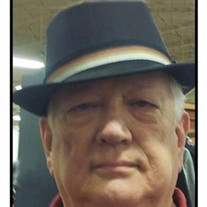 Denny James Walthers, 77, of McPherson, Kansas passed away suddenly at his residence Saturday morning, June 26th. Denny Walthers was born on February 5, 1944, in the midst of the conflict of World War II in Arvada, Colorado. He was adopted by Walter and Ruby Walthers three days later. They were wonderful people who dedicated their lives to his care until their respective deaths. Denny served in the United States Air Force and was stationed at Mather AFB in Sacramento, California where he was attached to the 320th Bomb Wing, 441st Bomb Squadron of the 8th Air Force, Strategic Air Command. During his service his Bomb Wing was sent to Guam where he participated in the first use of B-52 Bombers in actual combat over Viet Nam. Denny was a member of DECUS. Denny enjoyed target shooting, sitting in the park to eat lunch, and caring for his grandchildren. His favorite holiday was the 4th of July, and he loved animals very much, including his 3 dogs, Chi Chi, Cinder, and Angel. He also enjoyed apocalyptic movies and criminal justice shows. Denny had some additional information prepared to use that he wanted shared: Denny was very proud of his military service and if asked would offer a story or two concerning that service. He was particularly proud of assisting in the creation of “Gilligan’s Island” at Anderson AFB, Guam just outside the ‘O-club’. This was simply a hill next to the O-club where they placed several picnic tables, barbecue grills and a sign made by one of the crew members. It was a place of coming back down with beer and steaks after twelve hour missions over Nam. It became a revered place for all combat crew that followed and even mentioned along with photographs in the book “Flying From The Black Hole” by Robert O. Harder published in 2009. Denny was active in making sure that our national flag was treated with respect wherever he went. During his first attendance as a USD-418 School Board meeting there was no pledge done. His first words to the board during ‘public input’ were that from now on he expected it to be the first item on the agenda at every meeting. It began at the next meeting and continues to this day. Denny was active in getting things done in the community. Not by serving on any commission or council or board, but behind the scenes with what he called ‘people’. As a general rule, Denny was the only non district person present at USD 418 School Board meetings. He often stood up for and defended the students of the district when the administration was running roughshod over them. On more than one occasion Denny would have a ‘little chat’ with teachers or administration to resolve issues that should have never been issues. Denny was regarded as someone the students could count on if they were really being intimidated. When his oldest daughter graduated from McPherson High, Denny entered the ‘roundhouse’ significantly before anyone else. It was so early in fact that the school was locked up tight. Then Lou Faust the Vice-Principal entered, turned on the lights and found Denny sitting in the front row he asked him “How did you get in here”? Denny’s simple and straightforward reply was “this place is not as secure as you think it is”. Denny’s real forte was his family. Denny was a defender, ALL OF THE TIME! This was true for his wife, daughters, grandchildren, and pets. He is survived by his daughters, Stephanie Smith, of Charleston, South Carolina and Angela Fehr and her husband Michael, of Salina, Kansas. He is also survived by his four grandchildren, Chloe, Caleb, Edward (EJ) and Grayson. Denny was preceded in death by his father, Walter Walthers, his mother Ruby Walthers, his wife Marcia Walthers, and his uncles Milton and Ervin Walthers. A Celebration of Life will be held on Tuesday, July 6, 2021 from 3:00 p.m. - 5:00 p.m. at Glidden - Ediger Chapel, McPherson, Kansas. Military honors will be provided by the American Legion Post 24 and Veterans of Foreign Wars Post 2715 both of McPherson, Kansas. Memorials are to American Cancer Society or McPherson Humane Society and they can be sent to Glidden-Ediger Funeral Home; 222 W. Euclid St., McPherson, Ks. 67460.

Denny James Walthers, 77, of McPherson, Kansas passed away suddenly at his residence Saturday morning, June 26th. Denny Walthers was born on February 5, 1944, in the midst of the conflict of World War II in Arvada, Colorado. He was adopted... View Obituary & Service Information

The family of Denny James Walthers created this Life Tributes page to make it easy to share your memories.

Send flowers to the Walthers family.