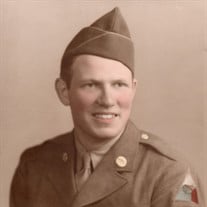 I arrived into this world on February 28, 1923, at the McPherson County Hospital, McPherson, Kansas. I was the third of six children born to Arthur Theodore and Ida Caroline (Nelson) Johnson. My folks were both of Swedish decent and all four... View Obituary & Service Information

The family of Donald James Johnson created this Life Tributes page to make it easy to share your memories.