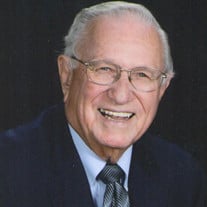 Don Steffes was born on January 13, 1930 to Bill and Marie (Dwyer) Steffes in Olpe, Kansas. He was the second of four children. His older brother Gene and spouse Pat live in Olpe and Gene died in 2011, his younger brother Dale and spouse, Sandy live in Houston, Texas and his younger sister Clarice and spouse Walter Dengel live in Ottawa, Kansas. He graduated from St. Joseph’s Grade and High School in Olpe in 1947 and immediately enlisted in the army and served 18 months. He then enrolled in Emporia State University and graduated in 1952 with a business degree. While working on pipeline construction jobs in the U. S. and Canada he met and married Janie Steele in Gladewater, Texas on October 10, 1953. After a year of pipeline work, he enrolled again at Emporia State in their Master’s degree program. He worked on this degree for several years and graduated in 1958 with a major in business and economics and his master’s thesis was on the Tourist Industry of Abilene, Kansas. After his class work, he was hired as the manager of the Abilene Chamber of Commerce in 1955 and was also manager of the Central Kansas Free Fair. He then worked for the Topeka Chamber of Commerce and in 1960 joined the McPherson, Ks. Chamber of Commerce as the Executive Secretary. He was extremely active in industrial recruitment. After five years, he was hired as the first managing officer of the Kansas Development Credit Corporation, a bank owned company designed to assist new manufacturing companies. In 1968 he was hired as President to manage the McPherson and Citizens State Bank. This bank was the dominant bank in the community and he completed his banking career in 1990 as the bank was sold to a larger institution. While at the bank he continued to work on industrial recruitment for McPherson. Today McPherson continues to be very prosperous with about 3,500 manufacturing jobs in a city of 14,000. During all of these years, he served on numerous committees, mainly in a leadership position. He served as president of the Kansas Bankers Association and also four years on the State Banking Board. He was active in many activities at the local, state and national level, serving on three committees appointed by Senator Bob Dole. While at the bank he became very active in local and Republican politics. While in Green Valley he served as Vice Chairman of the Community Performing Arts Center. He was a lifelong Catholic and was a member of many parishes. He was a 68 year member of the Knights of Columbus, 62 years as an American Legion member and 58 years as an Elk. During these years, Jane and he had seven children. They are Michael and spouse Roxanne of Tucson, AZ, Steve and spouse Judy of McPherson, David of McPherson, Andy, who died in 2009, Nancy and spouse Ed Rizzolo of San Antonio, TX, Terry and spouse Jenny of Tampa, FL, and Jennifer and spouse Jeff Curry of Boise, ID. His children have 12 children and they now have three grandchildren with one more on the way. After retiring from the bank, he ran for a vacant Kansas Senate Seat and was elected to two four year terms, serving, in the second term as Chairman of the Banking and Insurance Committee. He was very active in all aspects of state government. He was retired from the Senate in 2000 and he and Jane began their stay in Green Valley, AZ to be close to their grandchildren in Tucson. He then served four years on the Kansas Public Employees Retirement Board. Jane died in 2004, after 50 years of marriage, and he bought a small house in Green Valley, but continued to maintain his home in McPherson. During his banking, senate and retirement years he and Jane traveled extensively and made six trips to Europe and toured most of the United States. He continued to serve on the Board of the Mingenback Foundation beginning in about 1970 and served as President and managing officer for about 30 years. The Foundation has given, to local organizations, over this time, more than $7,000,000. He continued to travel and enjoy Green Valley and McPherson. He met Natalie Weitkunat of Green Valley in 2007, who had just lost her husband of 50 years, and they have, for eleven years, also traveled a great deal with trips to China, Peru, Canada, Panama, Mexico and four European trips. They also toured many of the states. They were close companions and enjoyed each other’s company for all of these years. At the age of 88, after a very active and healthy life, he finally met a problem he could not solve. But his problem was neither tragic nor even sad, it is just a part of life’s journey and he expressed confidence that better times lay ahead. He died on Thursday, May 24, 2018. Visitation will be held on Thursday, May 31st, 2018 from 6 p.m., to 7:45 p.m. at St. Joseph's Catholic Church with Rosary at 8:00 p.m. Mass of Christian Burial was said for Don at 10:30 a.m. on Friday, June 1, 2018 at St. Joseph Catholic Church in McPherson and he will be buried next to his wife, Jane and son Andy, in the McPherson Cemetery. In lieu of flowers, donations can be made to the St Joseph’s Catholic School and they can be sent in care of the Glidden - Ediger Funeral Home; 222 West Euclid Street; McPherson, Kansas 67460.

Don Steffes was born on January 13, 1930 to Bill and Marie (Dwyer) Steffes in Olpe, Kansas. He was the second of four children. His older brother Gene and spouse Pat live in Olpe and Gene died in 2011, his younger brother Dale and spouse,... View Obituary & Service Information

The family of Donald C. Steffes created this Life Tributes page to make it easy to share your memories.

Send flowers to the Steffes family.