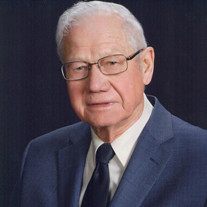 Donald Herman "Don" Steuber, 90, of McPherson, Kansas, passed away at 7:40 p.m., Thursday, February 28th, 2019 while in the company of family members, at Pleasant View Home, Inman, Kansas. Don was born in Sylvan Grove, Kansas on July 17, 1928, a son of Wilhelmina "Minnie" Frederica (Naegele) and Hermann Johann Steuber. Don attended the Bethlehem Lutheran Grade School and graduated from Sylvan Grove High School, Sylvan,Grove, Kansas. He was a member of Trinity Lutheran Church McPherson, Kansas and was currently attending New Gottland Lutheran Church. He honorably served in the U.S. Army as a Sgt (T) in the Korean War. He received the NDSM. Don worked for N.C.R.A. and started out as a plant worker. Through the years he was a towerman, operator, maintenance man, and retired as a pipefitter in 1991. Don was a member of the American Legion Post 24, McPherson Lions Club, Studebaker Drivers Club, and was a former member of the Grace Lutheran Men's Club. Don enjoyed his Studebaker cars, deserts, especially pie, traveling to Europe, through the Panama Canal, Canada, Mexico, Alaska, Hawaii, the Caribbean several times, attending the Steuber reunions attending car shows and spending time with his family, especially his grandchildren. Donald Herman Steuber was united in marriage to Alice Faye Weinhold on November 22, 1956 at Denmark Lutheran Church, Denmark, Kansas. He is survived by his wife, Alice Steuber, of McPherson, Kansas; his son, Gary Steuber, of Loveland, Ohio; his siblings, Neal J. Steuber and wife Wanda, of Salina, Kansas and Ruth Meyer, of Linn, Kansas; his brother-n-law, Carl Gustafson, of McPherson, Kansas; his 2 grandchildren, David Steuber and wife Kelly and Diana Steuber; many nieces and nephews, other relatives and a host of friends. Don was preceded in death by his parents, Minnie and Hermann Steuber; a sister, Trula Gustafson; and a brother-in-law, Delbert Meyer. The memorial service will be held at the New Gottland Lutheran Church, rural McPherson, KS, at 11:00 a.m. on Friday, March 8th, 2019 with The Reverend Harry Grinstad officiating. Graveside services will be held at the McPherson Cemetery McPherson, Kansas with military honors presented by members of the American Legion Post 24 and Veterans of Foreign Wars Post 2715 both of McPherson. In lieu of flowers, memorial contributions may be made to New Gottland Lutheran Church or The Lutheran Hour or Parkinson Research Foundation and they can be sent in care of the Glidden - Ediger Funeral Home; 222 West Euclid Street; McPherson, Kansas 67460.

The family of Donald Herman Steuber created this Life Tributes page to make it easy to share your memories.

Send flowers to the Steuber family.