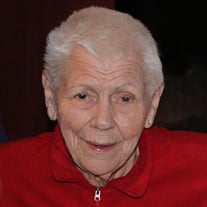 Donna D. Ladd, 84, of Galva, Kansas, passed away at 8:35 a.m., Tuesday, March 7th, 2017 peacefully, at Cedars House 803, McPherson. Donna was born in McPherson, Kansas on January 17, 1933, a daughter of Ruth Lorene (Schmidt) and Vernald M. Walline. Donna attended the Galva elementary school, and graduated from Galva High School, Galva, Kansas. She then attended and graduated from Brown Mackie Business School, Salina, Kansas. She was a member of Galva Christian Church Galva, Kansas where she serve her church through the years in many capacities. Donna worked as a secretary for Everett Mills Law Office before becoming a homemaker. She took great pride in providing for her family in this manner. After the children were in school, she began working as the City Clerk for the City of Galva and retired after 30 + years. Donna was a member of American Legion Auxiliary, McPherson Bowling League and is on the McPherson Bowling Hall of Fame. Donna enjoyed playing cards, traveling, gambling, KU Basketball, the out-of-doors, camping, and her family. Especially her grandchildren and great-grandchildren! She was her children's and grandchildren's greatest, and loudest fan and sometimes had to support them from outside the venue because she got so excited!!! Donna D. Walline was united in marriage to Wm. Alan Ladd on December 21, 1956 at Hutchinson, Kansas. They established their first home together in Galva, Kansas after moving extensively due to Alan's work in the oil fields. She is survived by her children, Vicki Johnston (Rick) of Wichita, Kansas and Toni Shope, of Galva, Kansas; her 7 grandchildren, Angie Coleman (Cameron), Nicole Ozmai (Steve), Lindsay Gribble, Paige Johnston, Travis Myers (Dani) Matthew Wescott (Shannon), and Luke Mann (Sarah); her 9 great-grandchildren - Campbell Coleman, Cade Coleman, Chloe Coleman, Mila Ozmai, Mason Gentzler, Kassidy Schumacher, Dawson Myers, Chace Wescott, Lindsay Mann, and baby girl Ozmai on the way!!!; other relatives and a host of friends. Donna was preceded in death by her parents, Ruth and Vernald Walline; her son, Butch Ladd, her grandson, Ryan Gribble, her husband Alan Ladd; and her brother Gerald Walline. Friends are invited to call on Friday, March 10, 2017 from 4 to 8 with family present from 6 to 8 p.m. at Glidden - Ediger Chapel, McPherson, Kansas. The funeral service will be held at Galva Christian Church, Galva, Kansas, at 10:30 a.m. on Saturday, March 11th, 2017 with Reverend Tripp Edwards and Reverend Phil Radatz officiating. The final resting place will be at the Empire Cemetery, rural Galva, Kansas. In lieu of flowers, memorial contributions may be made to Galva Christian Church and they can be sent in care of the Glidden _ Ediger Funeral Home; 222 West Euclid Street; McPherson, Kansas 67460.

The family of Donna D. Ladd created this Life Tributes page to make it easy to share your memories.

Send flowers to the Ladd family.