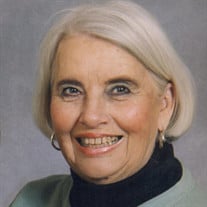 Edna May Milleson, 86, of McPherson, KS, passed away at 11:55 a.m., Friday, July 13th, 2018 while in the company of family members, at the Cedars House 807. Edna was born in Assaria, Kansas on December 8, 1931, a daughter of Rose A. (Eibert) and Harley Raymond Lamer. Edna attended the saline county schools and Gypsum High School, Gypsum, Kansas. She was a member of First United Methodist Church McPherson, KS. Edna was a homemaker and she took great pride in providing for her family in this manner. She also owned and operated Edna's, a clothing store in McPherson and worked for the Cedars. Edna enjoyed family, friends, and Native American Art. Edna Lamer was united in marriage to Donald Raymond "Chuck" Milleson on August 20, 1949 at Salina, Kansas. Chuck died on December 16, 2012. She is survived by her sons, Michael Milleson and wife Martha, of Leavenworth, Kansas and Brent Milleson and wife Nyla, of Haymarket, Virginia; a brother, Raymond Lamer and wife Shirley, of Salina, Kansas; her 4 grandchildren, Valerye Milleson, Dylan Sechler and wife Morgan, Barrett Milleson, and Caylor Milleson; her 2 great-grandchildren, Nahla Bae Sechler and Theodore Milleson; many nieces and nephews, other relatives and a host of friends. Edna was preceded in death by her parents, Harley and Rose Lamer; her three sisters, Betty, Dorothy, and Arlene; her 3 brothers, Dale, Don, and Leslie: two sons, Ricky Allen and Randy Lee Milleson, two daughters, Sherry Lou Milleson and Robertta Sechler, and her husband Chuck Milleson. Memorial service will be held at First United Methodist Church, McPherson, Kansas, at 11:00 a.m. on Saturday, July 28th, 2018 with Reverend Karen Rice-Ratzlaff officiating. Interment will be at the Gypsum Hill Cemetery Salina, Kansas. In lieu of flowers, memorial contributions may be made to St. Jude's Hospital and they can be sent in care of the Glidden - Ediger Funeral Home; 222 West Euclid Street; McPherson, Kansas 67460.

The family of Edna May Milleson created this Life Tributes page to make it easy to share your memories.

Send flowers to the Milleson family.