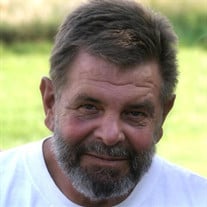 Edward E. "Popie" Ediger, 68, of McPherson, Kansas, passed away at 8:40 p.m., Thursday, March 1st, 2018 surrounded by his family, at McPherson Hospital. Edward was born in Hutchinson, Kansas on December 6, 1949 a son of Vietta June (Stewart) and Sam N. Ediger. Ed attended elementary school and junior high in western Kansas, then attended and graduated from McPherson High School in 1967; graduated from Emporia State Teachers College in December of 1975 and then attended the Mortuary Science School at Kansas City, Kansas Community Junior College where he received a degree in Mortuary Science in December of 1976. He was a member of First Presbyterian Church in McPherson, Kansas. Ed served as a SeaBee, UT2 in the U.S. Navy in the Vietnam War. Through the years Ed worked as a Funeral Director/Embalmer and later as a co-owner at Glidden-Ediger Funeral Home McPherson, Kansas since 1975 Ed was a member of the American Legion Post No. 24, Veterans of Foreign Wars Post No. 2715, Optimist Club, McPherson Shrine Club, McPherson Chamber of Commerce, all of McPherson; ISIS Shrine, Salina, Kansas; Kansas York Rite Bodies. Ed Ediger was united in marriage to Jeanne Glidden on January 2, 1972 in McPherson, Kansas. Surviving members of his family include his wife Jeanne Ediger, of McPherson, Kansas: His three sons, daughter-in-laws and grandchildren, Josh and Teri Ediger and their children Collin Reed, Addison Lynn, and Britton Ann, of Baldwin City, Kansas. Beau Ediger and his children, Braeden Nick, Landen James, and Sophia Lynn, of McPherson Kansas. Sam and Sarah Ediger and their children Logan Edward, Laeton Lee and Lawson Sammie Dale of McPherson Kansas; other relatives and a host of friends. Ed was preceded in death by his parents A memorial service will be held Saturday, March 10, 2018 at 2:00 p.m. at the Glidden-Ediger Chapel, with H. Dick Reynolds, Jr. officiating. Military honors will be held by the American legion Post 24 and the Veterans of Foreign Wars Post 2715 both of McPherson. A private family burial was held at the McPherson, Cemetery, McPherson, Kansas. In lieu of flowers, memorial contributions may be made to Pets For Vets and the McPherson Shrine Club Children's Fund and they can be sent to Glidden-Ediger Funeral Home; 222 West Euclid St., McPherson, Kansas 67460.

The family of Edward E. Ediger created this Life Tributes page to make it easy to share your memories.