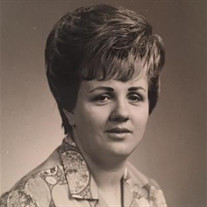 ELFRIEDE "EFFIE" SELF Elfriede "Effie" Self, 75, a resident of the Portland community, died Friday morning, May 5, 2017 at Providence St. Vincent's Medical Center in Portland. ELFRIEDE "EFFIE" SELF was born on June 29, 1941 in Linz, Austria, the daughter of the late Jakob and Emilie (Schoeck) Bunk. As a young child she fled across war torn Europe with her family. At the close of World War II the family was able to immigrate to America and ultimately made their home in McPherson, Kansas. She was raised in the Lutheran faith. She was united in marriage to Charles F. "Chuck" Self, Sr. on August 30, 1969 at the First Christian Church in McPherson, Kansas. They celebrated their 47th wedding anniversary last year. Following their marriage they made their home in communities in Kansas, Alaska, New Mexico, Oregon, Tennessee, and Missouri before returning to Oregon, where they have resided since. Effie worked in Food Service for twenty years. She began as a waitress and progressed to restaurant management. She began her second career as a medical coder, working until the age of 67 when she retired. During her life she spent many hours traveling to different schools and organizations talking about her experiences during World War II. Among her special interests, Effie enjoyed cooking, reading and caring for the dogs. She especially enjoyed watching her son play football and hockey and her grandsons play football and wrestle. When she couldn't attend, she enthusiastically listened to the play by play. She was a very proud grandma. She is preceded in death by her parents, Jakob and Emilie Bunk, two brothers, David Bunk and Erich Bunk, and her son, Del Wedel. Survivors include her husband, Charles F. "Chuck" Self, Sr., of Portland, Oregon, her daughter and son-in-law, Connie and Joseph Campfield, of Kingsville, Missouri, her son and daughter-in-law, Charles F. "Butch" Self, Jr. and Denise, of North Plains, Oregon, her sister, Elsa Boston, of McPherson, Kansas, her brother and sister-in-law, Walter and Cindy Bunk, of Marquette, Kansas, and her brother, Ewald J. "E.J" Bunk, of Craig, Colorado. Also surviving are her grandchildren, Jeremy Wedel, of Newton, Kansas, Jeanne and her husband, John Eskeli, of Wichita, Kansas, Tyler Self and Joshua Self, of North Plains, Oregon, one great grandson, Beau Eskeli and many nieces and nephews. Visitation will be held on Friday, June 30, 2017 from 3 p.m. to service time at the McPherson Cemetery, McPherson, Kansas. Graveside and burial services will be held on Friday, June 30, 2017 at 3:30 p.m. at the McPherson Cemetery, McPherson, Kansas with Wally Bunk officiating. The family suggests that remembrances may be made to Elim Lutheran Church, 403 N. Lincoln, PO Box 236, Marquette, Kansas 67464 in her memory.

ELFRIEDE "EFFIE" SELF Elfriede "Effie" Self, 75, a resident of the Portland community, died Friday morning, May 5, 2017 at Providence St. Vincent's Medical Center in Portland. ELFRIEDE "EFFIE" SELF was born on June 29, 1941 in Linz, Austria,... View Obituary & Service Information

The family of Elfriede "Effie" Self created this Life Tributes page to make it easy to share your memories.

Send flowers to the Self family.