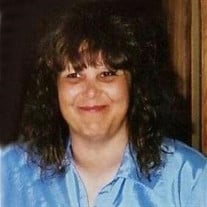 Elizabeth A. Skipworth, 63, of McPherson, KS, passed away at 7:08 a.m., Thursday, June 27th, suddenly, at McPherson Hospital ER. Liz was born in Salina, Kansas on October 15, 1955, a daughter of Roscoe Talmadge Acklin and Shirley Mae (Ditto) Acklin. Liz attended the Salina grade schools and Salina Central High School, Salina, Kansas. Elizabeth Ann Acklin was united in marriage to Roger David Merihew on April 14, 1974 at Salina, Kansas. This union was blessed with the birth of two daughters, Tina and Libbi. Elizabeth was united in marriage to Timothy Eugene Skipworth on June 24, 1994. Liz was a homemaker and she took great pride in providing for her family in this manner. She also worked Janitorial at McPherson College, and later was a CNA at the Cedars Health Care Center both of McPherson. Liz was an excellent cook and baker, enjoyed getting out and living and loved all her grandkids. She also loved her dogs and riding shotgun with her truck driver husband Tim. She is survived by her husband, Tim Skipworth, of McPherson, Kansas; her daughters, Tina M. Gallo, of Osage Beach, Missouri and Libbi A. Chrisp, of Salina, Kansas; her father, Roscoe Acklin of Salina, Kansas; her brother, R. Thomas Acklin, of Mableton, Georgia; and her sister Yvonne Goodwin, of Mableton, Georgia; her favorite six grandchildren, John Gallo, Shelby Gallo, Garrett Gallo, Ethan Chrisp, Issac Chrisp, and Abria Chrisp several nieces and nephews other relatives and a host of friends. Liz was preceded in death by her mother, Shirley Acklin. Private family services will be held at a later date. In lieu of flowers, memorial contributions may be made to Elizabeth Skipworth memorial fund and they can be sent in care of the Glidden - Ediger Funeral Home; 222 West Euclid Street; McPherson, Kansas 67460.

The family of Elizabeth A. Skipworth created this Life Tributes page to make it easy to share your memories.

Send flowers to the Skipworth family.