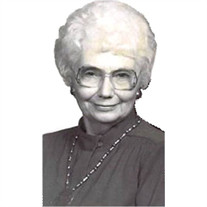 Evelyn L. (Ev) Friesen, 101, of Inman, Kansas, passed away at 8:20 p.m, Friday, January 20th, 2017 peacefully, at Pleasant View Home, Kansas. Evelyn was born in Hillsboro, Kansas on August 13, 1915, a daughter of Elizabeth (Klein) and John L. Loewen.Evelyn attended and graduated from Hillsboro High School, Hillsboro, Kansas. She attended Sterling College, Sterling, Kansas where she received her teaching certificate.She was a member of St. Peter's United Church of Christ Inman, Kansas. Evelyn was an elementary school teacher (1-8) in a one room school house at South Inman Elementary School, Inman, Kansas for 5 years, she was a homemaker, was an Avon lady, sold advertising and wrote for the Inman Review, and worked as a postal worker for the Inman Post Office for 20 years prior to her retirement. She was a member of the National Society of Decorative Painters, the Inman Senior Citizens, Phidelis Club, Blue Bird Club, Home Demonstration Unit, founding member of the Inman Summer Recreation Program, and was a 4-H leader for many years. She enjoyed painting, flower arranging, and gardening. Evelyn L. Loewen was united in marriage to L. Walter 'Butter' Friesen on June 10, 1939 at Hillsboro, Kansas. He died on January 25, 1991. She is survived by her daughters, Ann Buzenberg, of Durham, North Carolina and Patricia 'Pat' Friesen and her husband Chuck Jasper, of Leawood, Kansas; her sister, Elvina Ediger, of Cameron Park, California; 3 grandchildren, Ben Jasper and his wife Jihyea, of New York, New York, Lynn Godfrin and her husband Peter, of Boston, Massachusetts, and Robbie Buzenberg, of Durham, North Carolina; her 2 great-grandchildren, Alyssa Godfrin and Luke Godfrin; several nieces and nephews, other relatives and a host of friends.She was preceded in death by her parents, her husband Walter 'Butter' Friesen; two sisters, Linda Loewen, and Malinda Frank and her two brothers, Elvie and Wesley Loewen.Graveside services will be held at 10:00 a.m. on Saturday, January 28, 2017 at the North Inman Cemetery, Inman, Kansas with Pastor Dennis Ureche officiating.The memorial service will be held at Pleasant View Home Chapel, Inman, Kansas, at 11:00 a.m. on Saturday, January 28th, 2017 with Reverend Dennis Ureche officiating. In lieu of flowers, memorial contributions may be made to St. Peters United Church of Christ or Inman Public Library, in memory of Evelyn and they can be sent in care of the Glidden – Ediger Funeral Home; 222 West Euclid Street; McPherson, Kansas 67460.

The family of Evelyn L. Friesen created this Life Tributes page to make it easy to share your memories.